DAEGU, South Korea: (Sun, 19, March): Martin Prime will begin his bid for retain his 60m gold medal at this year's World Masters (Over 35) Indoor Track and Field Championships in Deagu, South Korea later today, Sunday (T&T time). Prime will line up in the heats of the men's 50-54 60m events at 12:25 pm on Monday, 20, March (South Korea time). However, South Korea is 13 hours ahead of Trinidad and Tobago so Prime will actually run at 11:25pm on Sunday night.  The 2014 champion has been assigned lane six in heat seven and will be aiming to win his heat to automatically advance to semifinals set for later on Monday (4: 58pm South Korea time, 3:58am-T&T time).  The winner of each heat and the next best 11 finishers based on time will qualify to the semifinals.

Prime won gold at the 2014 edition in Budapest, Hungary in 7.44 seconds and was second in the 200m (24.23). Gwendolyn Smith also won gold, taking the women's 45-49 javelin title with a distance of 45.35m. Gwendolyn was scheduled to compete in South Korea along with Ayanna Hutchinson-Britton, Rodney Liverpool, Sasha Springer, Donelle Stafford and Joan Hospedales. However, they were unable to make the trip.  Prime was sponsored by the Telecommunications Services of Trinidad and Tobago (TSTT) while Raymond Smith's travel expenses were covered by Methanex Limited and Run Safe Safety & Rescue Limited.

T&T  at the 2014 World  Masters (Over 35) Indoor Track and Field Championships in Budapest, Hungary

Prime and Smith at Opening Ceremony
Raymond Smith (right) and Martin Prime (second from right) at the opening ceremony of the 2017 World Masters (Over 35) Indoor Track and Field Championships in Deagu, South Korea. 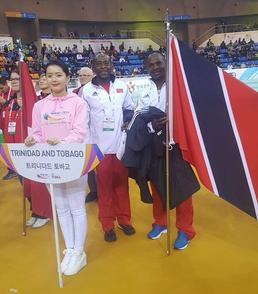