Keshorn Walcott and Michelle-Lee Ahye were named top athletes of the year 2016 by National Association of Athletic Administrations (NAAA) at its annual awards ceremony at the Radisson Hotel in Port of Spain on Saturday, January, 7. Walcott copped the male award after his bronze medal performance in the men's javelin at the Rio Olympics Games in August while Ahye collected the female prize after advancing to the finals in the women's 100m and 200m finals in Rio. Ahye also helped the national women's 4x100m team to fifth place.

Walcott his second Olympic medal with a distance of 85.38. The 23rd year old was aiming to defend the title he won at the 2012 Olympic Games. He warmed up by qualifying for the finals with a 88.68m effort, the second best throw of his career, only behind his national record of 90.16. The 2012 World Junior champion ended the year third on the IAAF Performance list.  Ahye was sixth in the women's 100m (10.92) and 200m (22.36) finals  and  at the Rio Olympics. The 2011 Pan American Junior 100m champion qualified for Rio after taking the 100m (11.00) and 200m (22.33) title at the National Senior Championships. Her 22.33 clocking is new national record improving the 22.51 by Semoy Hackett established in 2015. Ahye further lowered the national mark to 22.25 in the semifinals in Rio and ended the season with the eighth best performer in the World. In the 100m she established a season's best of 10.90 in the semifinals in Rio, one of four sub-11 clocking for the season.

Walcott and Ahye named top NAAA 2016 athletes of the Year.

Taken at the NAAA's 2016 Annual Awards Ceremony at the Radisson Hotel, Wrightson Road, Port of Spain on Saturday, January, 7, 2017. 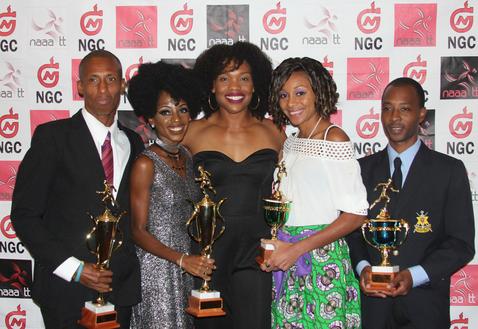 The Carenage resident ended the season tenth on the World rankings.  Ahye began her 2016 season competing indoor where she was missed out on a podium finish in the women's 60m finals at the World Indoor Championships taking fourth place (7.11). She set a new national record of 7.09 in the heats and matched the time in semifinals.  Walcott won the NAAA top Male Athlete Award for fourth occasion in five years while Ahye collected the female equivalent for the second straight year.  Walcott was also the top male senior field athlete year and Ahye female track athlete for 2016. Walcott is a graduate of Toco Secondary and Ahye attended Tranquility Secondary. Both represented their schools at the National Secondary Schools track and field Championships. Ahye collected her award from President of the Republic Anthony Carmona. Walcott was absent and Cleopatra Borel accepted his award from President Carmona.

Olympic men's 400m fourth place finisher Machel Cedenio landed the top male senior track athlete prize. Cedenio missed out on a medal in Rio despite clocking 44.01 seconds, a time which would have earned him a medal in every previous Olympic finals and would have won 19 of the 28 Olympics games held. His performance was also a new national record and ranks the 21 year old at fourth in the world and 15th on the World All-time list. Cedenio won the 2015 Top Male Athlete of the Year accolades. He competed for Presentation College-San Fernando and Southern Academy at the National Secondary Schools Champs. Cleopatra Borel was seventh (18.37) in the women's shot put finals at the Rio Olympics, her best place at the major global outdoor finals. She missed out a medal at the World Indoor champs where she was fourth (18.38) won the top female field athlete honour for the ninth consecutive year. Borel ended the season at 12th on the World Indoor Rankings and 14th on the Outdoor list.

Tonya Nero (formerly ASJA Girls College) and Curtis Cox (formerly Scarborough Junior Secondary/Signal Hill Senior Compre) repeated at the Top Distance runners. Nero was the leading woman after recorded a nail-biting victory in the Run Barbados 10K in December passing the second and placed runners mere inches before the finish line. She also won the South American 10K, the Guardian Skin, Nestle and Massy 5K runs, Eastern Credit Union 15K and the Bakers Insurance Half Marathon. She was also second (first local) in the UWI Half Marathon and finished 26th in the prestigious Dubai Marathon.  Cox at the age of 49 years was victorious in the Guardian Shine 5K, Flow One Lap, Nestles 5K and the South American 10K. Chairman of the Sports Company Michael Phillips presented Nero and Cox with their awards.