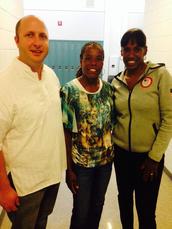 Marsha Mark-Baird made her debut at the World Masters (Over 35) Track and Field Championships at the 2015 edition in Lyon, France in grand style.  She won the women's 40-44 Heptathlon and long jump titles and anchored the T&T's women's 35-39 4x100m relay to victory in a world masters record time of 47.64 seconds along with her younger compatriots Ayana Hutchinson, Sasha Springer and Donelle Stafford. With her success in Lyon, she arrived at the 2016 World Masters Champs which took place in Perth, Australia over the past two weeks (October 26-November 6) with her sights set on more gold, four in particular. The outcome: she retained the women's 40-44 Heptathlon (5390 points) and long jump (5.57m) titles. She also took home the javelin (40.13m) crown ahead of compatriot and defending champion Geraldine George (39.33).  She missed out her fourth gold when she had to settle for silver in the 80m hurdles (11.72 seconds). Mark-Baird won all three of the titles won by the T&T team and half of the eight medals earned. The National women's Heptathlon record holder (5,960) said medalling in all four of the events she participated in was significant for her. "My highlights were being able to be on the podium four times." She added that competing pain free was another high point.

Her expectations just medalling may have been quite modest as she won three gold medals one year earlier. In addition she is a two-time Olympian for T&T having competed at the 2000 and 2004 Olympic Games. She was 22nd at the 2000 Games in Sydney, Australia with 5627 points and was 25th four years later in Athens, Greece, improving her national mark to 5,960 points. At the age of 42 years she had her sights set to competing at the Rio Olympics earlier this year but fell short of the qualifying mark.  She credits her success in Lyon as a motivation to go for a quartet of gold medals in Perth. "The experience in Lyon helped me in this meet because I came back hungry and wanted to break the world record in the heptathlon.  Also I did not do as many events in Lyon because I wasn’t sure how tired I would be after the heptathlon. " Reflecting on her achievements she felt could have competed for more gold. "I felt fine and actually wished I did one or two more events."

The Utah-based athlete is grateful for the support she received from her family. The mother of three was accompanied by her husband Gregory who was her manager in Perth. Gregory ensured the photos and videos were taken and the Facebook pages were updated. "My family, husband and children supported me through this journey. My coach Derek Ellis believed in me. My trainer Jeff Hurst kept my body working especially at times when I thought I could not possible go on. My trainer sent me to my chiropractor Ben Higbee who also made the necessary adjustments to my hips and joints." She also credits her friends and fans and added that their encouragement played a part in her achievements.  "I have friends and fans who gave me words of encouragement on a regular basis. This success of mine has been a team effort. No champion does it alone." She also paid tribute to her team-mates in Perth. "(My team-mates) were amazing. We were able to support each other when possible. We all got along and had a team spirit about us I have not seen in a while."

Reflecting on her trip to Perth she was happy with the organisation of the Championships. "The meet was very organized and well run. The (organisers) accommodated the athletes the best way they knew how. They provided transportation on trains and buses to and from our competition areas. The Volunteers were all so happy and willing to help in anyway possible."   The five time World Masters Champion also thanks fellow masters competitor Geraldine George for encouraging her to compete. "Geraldine has been begging me to try out masters for six years now and I finally tried it for the first time last year in Lyon."

She added that the Masters level is a very competitive one. "When a 70 year old man can run a 200 meters as fast as me, now that says a lot about the competition." She added that participating at the Masters level is a fulfilling. "Competing at Masters (gives one) a sense of self pride. Knowing you are capable of things you never thought you could do in your youthful days is very rewarding. I may never run as fast or jump as high or hurdle as fast as I did in my 20s or 30s but I can be the best in the world at this point in my life." She encouraged other persons who are have attained the masters age (over 35) to "come and find out for themselves."

Mark-Baird trains the university she attended, Brigham Young University in Provo, Utah, USA . She said she began preparing for Perth just over one year ago. "I have been preparing for this meet for 15 months. I got three weeks off after Lyon and my preparations began. I did a 12-14 week training cycle then two weeks off and it starts again. I spent hundreds of hours preparing for this meet. Over a year of training for this."  She added that she had to balance her family and work time in order to train. "Between a family, coaching on the side, working part-time, and other responsibilities I managed to make it all work."  Now she plans to take some years away from the sport to focus on her family. However, she has not retired. She intends to be back. Look out for her.

The Point Fortin Secondary graduate represented T&T with distinction as a junior athlete winning three Carifta gold medals, all in the javelin discipline. She won girls under 17 crown in 1990 and under 20 titles in 1991 and 1993. She also won silver in the under 20 division in 1992 and bronze (under 17) in 1989. At the Central American and Caribbean (CAC) Junior Championships she was a winner of the girls under 20 event in 1992. As a senior athlete she won silver at the at the 1998 CAC Games she secured silver in the Heptathlon with 5706 points.  The mother of three also holds the  T&T women's indoor Pentathlon (3958) record and is the former national junior women javelin record holder.