Antoine also secured the top Over 18 prize. Ottey and Brittiney Hutson (Sangre Grande Secondary) were second and third. Antoine also added the 5Km title to the Cross-Country trophy she won on October 16.  Lewis was the top under 16 finisher with Shenell Alexander (Palo Seco Secondary) and Ternika Lara (Toco Secondary) following her home. Joseph was the best in the under 14 division ahead of Croal and Bruce.  Toco's Henry, Otton and Phillip swept the top three spots in the under 18 category.

Barker ran away with the Over 18 top award in front of Young Lao and Dann. Jones was the best among the Under 18 competitor with Madoo and Cova taking second and third. Pulchan took home the fastest Under 16 finisher award ahead of Michael Stanley (Toco Secondary) and Ryan Joseph (Matelot Community College). Toco Secondary retained the boys and girls team and the overall schools honours. Toco Girls finished well ahead of  Palo Seco Secondary and ASJA Girls-San Fernando while the Toco Boys took the top prize from Sangre Grande Secondary and St. Joseph Secondary.

One hundred and thirty (130) athletes competed, well below last year's figures of 146. However, students from schools the Port of Spain and Environs and St. George East and Tobago Educational districts did not participate.

Speaking after her victory Antoine said she was thankful to God and hard work paid off. "I want to give God thanks and just want to say when you put hard work out you get results. "  The sixth form student said she missed a month due to an injury. "I was injured before school re-opened in September and could not train for a month but when I started back to train I worked very hard to make up for the training I missed. The race was little hard as I have a knee injury and my calves are hurting."  Antoine was looking forward to running against rival Kershell Mt. Intyre (St. James secondary) who did not participate. "This year's victory was easier because I was looking forward to seeing Kershel Mc Intyre (St. James Secondary) but she was not here."

The Monte Video-Toco resident is in her second year at sixth form and credits the example of her coach Anna-Lee Walcott-Stewart who was a student athlete. "It is easy balancing (academics and sports)  because our coach Miss Analee always tells us she did both and I think I could do the same." Antoine is pursuing studies in Environment Science, Geography and Sociology.

Boys winner Barker was pleased of his triumph. "I am very proud. I did what I came here to do. I am more of a track runner but I came out to build my endurance.  One day I am hoping to compete in the 800m in the Olympics. Barker is a fifth form student.

Toco Secondary's Walcott-Stewart was happy with her team's performance and praised the support of the school's staff. "I think we did extremely well. Some athletes missed the  event so we could have done better. We prepared very hard and the results showed that we did prepare well. We have strong body, especially teachers, who are very supportive of the students." Walcott-Stewart, who is also a teacher at the school,  said the students are encouraged to balance their studies with participation in sports. "We push them both academically and athletically to show them that both work together. We try to show that that their life is not sport alone but academics are important."

President of the Trinidad and Tobago Secondary Track and Field Association  (TTSSTFA) Phillip Allard said there were less athletes than anticipated as several schools were participating in the zonal Intercol football finals across the country on the same afternoon. "We expected a larger turn-out but some schools were compete in (zonal) Intercol (football) finals."  Allard added that the TTSSTFA will be looking to keep the open category which is open to the members of the public. " The winner (of that category Anthony Phillip),  pulled (the boys winner) Otis Barker.  We are looking to continue with the open category. The idea is that we would have professional (athletes) who would pull our students to prepare themselves better.

The Trinidad and Tobago Secondary Schools Track and Field Association offers congratulations to the all participants and winners in the 2016 Digicel Sportsmax-sponsored TTSSTFA Secondary Schools 5Km race. The TTSSTFA thanks all the teachers, coaches and support staff who prepared and accompanied the students to the event. Thanks are also extended to the officials, parents, spectators, medical and police officers who contributed to the successful staging of the 2016 edition.  Special mention to the Ministry of Education and Digicel Sports-Max for the supporting and partnering with the TTSSTFA.

For more information on the 5K results, click here

MARABELLA, Trinidad: Toco Secondary's Donicia Antoine and Otis Barker won the 2016 Digicel SportsMax - sponsored TTSSTFA Secondary Schools 5K race which started and ended at the Marabella South Secondary at the corner Tagore Street & Gopaul Lands, Marabella on Sunday, November 20. Antoine captured the girls' title for the second straight year in a time of 19 minutes 57 seconds (19:57) while Barker secured the boys' version for the first time in 16:34, improving from second place in 2015. 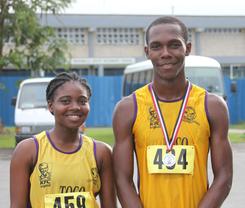