SCARBOROUGH,Tobago: Tobago’s best high schools athletes will battle for honours at the Tobago zonal finals of the National Secondary Schools Track and Field Championships carded for the Dwight Yorke Stadium, Bacolet on Wednesday (February 24) and Thursday (February  25). The zonals finals are the culmination of weeks of sports meets of the secondary schools on the island.  Bishops High will be seeking to win another title and will be relying on Carifta gold medallist Akanni Hislop and brother Ako. Akanni is the heavy favourite to take the boys under  20 100m/200m double after he blazed to the Carifta boys under 18 200m gold and 100m silver at the 2015 Carifta Games in St. Kitts/Nevis. Ako is expected to content for top honours in the boys under 18 hurdles.  Carifta representatives Anya Akili, Edson Moses, Franklyn Stanislaus, Dwight St. Hillaire and Peaches Stewart are among the Bishops line up. Akili was the  top female overall (and girls under 18) at Bishops’s sports meet earlier in month and is expected to standout in the sprints, jumps and hurdles while Moses copped the boys under 20 crown.

Goodwood High, Roxborough Secondary, Pentecostal Light and Life and UWI Sixth Form are all expected to field competitive teams. UWI Sixth form, though expected to be a smaller contingent,  will have Carifta medallist Omari Benoit and another Carifta representative Chevell McPherson in their colours.

The two-day zonal meet is expected to get underway at 9 o’clock on both days with the parade of teams expected to take place on Thursday.  The competition is hosted by the Tobago zonal committee headed by Xavier King and will take place through the courtesies of the Division of Education, Youth Affairs and Sport.

The national finals are carded for April 21 and 22 at the Hasely Crawford Stadium. Mucurapo.

Bishops High
Bishops High will aiming to with the top school title for another year at the Tobago zonal Secondary Schools Track and Field Championships at the Dwight Yorke Stadium, Bacolet on February 24 & 25. (Photos courtesy: SPORTSCORE) 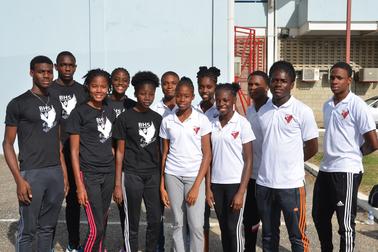