BU18 Javelin
Carifta boys under 18 javelin champion Tyriq Horsford of Signal Hill Secondary (second from right)  won his pet event on the second day of the Tobago Zonals at the Dwight Yorke Stadium, Bacolet on February 25. He stands on the podium silver medallist Rondel Toussaint of Bishops High (second from left) and bronze medallist Tyrese Lewis of Speyside High (right) after the trio received their medals from two-time T&T Olympian Sherridan Kirk (left).

Anyka Akili
Anya Akili of Bishops High clears the bar to win the girls under 18 high jump on the second day of the Tobago Zonals on Dwight Yorke Stadium, Mucurapo on February 26. 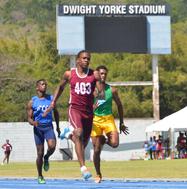 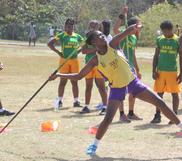 Parks wins the B U18 1500m.
Justin Parks of Sangre Grandre Secondary (left) wins the boys under 18 1500m ahead of school-mate Keith Subero at North East Zonals at the Larry Gomes Stadium on March 7 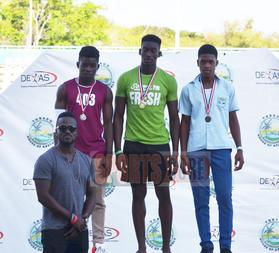 St. Francois Girls-1
Jeminise Parris (right) and Tyla Marie Scott (left) of St. Francois Girls competing at the the Port of Spain and Environs at the 2014 National Secondary Schools Championships. 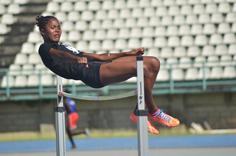 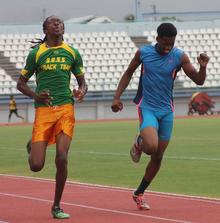 Close to 600 of T&T’s top junior athletes are set to battle over two days of exciting action in the 2016 National Secondary Secondary Schools Athletic Championships which are set for the Hasely Crawford Stadium, Mucurapo on Wednesday (April 20) and Thursday (April 21). Competing under the theme “Fire On The Tracks” the athletes will be representing their schools and districts in 104 events. Tobago is the defending zonal champions after taking the overall trophy in 2015 with North East, Port of Spain & Environs, St. George East, Patrick, Victoria, Caroni and South East following behind. The athletes will compete in the under 14, 16, 18 and over 18 age classes in the following events: (Track)­100m, 200m, 400m, 800m, 1500m, 3000m, 5000m, 100m/110m hurdles, 300m/400m hurdles, 4x100m, 4x400m; (Field)­shot put, discus, javelin, long jump, high jump, triple jump.

The Tobago competitors are eyeing their 26th straight victory and will have Carifta gold medallists Tyriq Horsford (Signal Hill Secondary) and Akanni Hislop (Bishops High) in their line­up. Horsford retained the boys under 18 javelin gold medal at this year’s Carifta Games in Grenada with a mammoth record throw of 73.00m while Akanni raced to the boys under 20 200m top prize to add to the under 18 gold won in 2015. At last year’s Secondary Schools Champs Horsford took the boys under 18 discus and javelin gold medals but may just compete in the javelin this year. He was the Top Male Athlete (Victor Ludorum) at the 2012 meet when he won four individual titles. While Akanni race over the 200m only at Carifta he may vie for the 100m and 200m double as he won both events at the Tobago zonals.

Port of Spain & Environs Zone and North East have the only other zones to finish in the top three in recent years and will be will be aiming to upset Tobago’s unbeaten run. With seven Carifta medallists in their contingent and twelve members who made the trip to Grenada, POS was the last zone to beat Tobago doing so way back in 1992. Former Carifta champion Jeminise Parris (St. Francois Girls) won bronze in the girls under 20 100m hurdles while she and Renee Stoddard (Providence Girls) helped the girls under 20 4x100m to bronze. Parris will be heavy favourite for the girls over 18 100m/400m hurdles while Stoddard is tipped for the girls over 18 200m and 400m sprints. Ianna Roach (Bishops Anstey) is favoured in the girls under 18 shot put after taking Carifta silver while schoolmate Akilah Lewis and Jenea Spinks (Holy Name Convent, POS) were part of the girls under 18 4x100m bronze medal team. Jaden St. Louis (St. Anthony College) and Recardo Prescott (St. James Sec) helped T&T to bronze in the boys under 18 4x400m.

Last year’s Victor Ludorum and this year’s Carifta selectee Avindale Smith (formerly of Arima Central of the North East Zone) is now wearing the colours of Queen’s Royal College. Smith will vie for gold in the boys under 16 100m, 200m and high jump. QRC will also have fellow Carifta picks Clement Campbell and Josiah Edwards who will look to sweep the boys under 18 long jump and triple jumps. Last year’s Carifta boys under 18 400m silver medallist Jacob St. Clair missed out on Carifta selection and will be looking to rebound by winning the boys over 18 200m and 400m for QRC. Port of Spain is expected to dominate the relays.

North East Zone will heavily rely on Tyrel Edwards and his Toco Secondary team­mates. Edwards sped to Carifta silver in the boys under 18 200m in Grenada and will be going for the 100m/200m/long jump triple this year. Last year’s Victrix Ludorum Ayanna Glasgow and the 2013 winner (and four time Carifta medallist) Akidah Briggs will lead Toco Secondary in the defence of the Top Girls Over 18 School title. Glasgow and Briggs be looking to go 1­2 in the javelin while Glasgow will be among the favourite in the high jump and long jump. Both will be aiming to atone for missing out on selection for this year’s Carifta team.

Last year’s Carifta bronze medalist Cheziah Phillips be among the favourites to medals in the girls under 18 100m and 400m hurdles. Che Lara (Arima North Sec) won gold in the boys under 16 200m and 400m events last year and will looking to repeat the feat in the under 18 category. Gabrielle Guerra (Holy Cross), Justin Park (Sangre Grande Sec) will also be the North East line up after excelling at the zonals.

St. Patrick will have Carifta bronze medallists and Point Fortin East Secondary duo of Onal Mitchell and Akeera Esdelle . Mitchell claimed bronze in the boys under 18 400m and 4x400m while Esdelle helped the girls under 18 4x100m to third. Antonia Sealy will be looking to dominate the girls under 16 category after finishing a creditable eighth in the girls open heptathlon in Grenada.

Debe Secondary’s Adel Colthrust and Marabella North Sec’s Anika Wolfe are the main hopes for Victoria. Colthrust took bronze in the boys under 18 100m in Grenada while Wolfe competed at the 2015 Carifta Games.

Patrice Richards (Holy Name Convent, Couva) was the star athlete for Caroni last year with her triple gold medal performance which helped her win the Top Girls Under 14 Individual crown and single­handedly led her school to the Top Under 14 title. Richards will again be at the helm of Caroni’s quest.

The Championships are the culmination of the 2016 season which began with the Schools Cross Country Run & Health Fair (October 15). The 5K (November 15), Relay Festival (February 18) were the other events.

The Championships are organized by the Trinidad and Tobago Secondary Schools Track and Field Association (TTSSTFA)...(website...www.ttsstfa.com). On the website are the press releases and results and all the events hosted by the TTSSFA and also other schools' track and field related events.

Last year the Association introduced a theme song and a theme for the Championships. The theme song is " I Believe" by sung by Jerrod Griffith of Presentation College­Chaguanas. The vision of the TTSSFA is to be the leader of track and field development in Trinidad and Tobago by the formulation of strategic relationships globally and in T&T, effective promotions of track and field initiatives and hosting professionally executed track and field events. The Championships are held under the auspices of the Ministry of Education.

Akanni Hislop wins B O18 100m
Carifta gold medallist Akanni Hislop (Bishops High) on his way to victory in the boys over 18 100m at the Tobago Zonal Championships at the Dwight Yorke Stadium, Bacolet on February 24.

Patrice Richards
Patrice Richards of Holy Name Convent, Couva, will be one of the star athletes for the Caroni Zone at this year's Secondary Schools Track and Field Championships at the Hasely Crawford Stadium, Mucurapo on April 20 & 21.