Xavier Mulugata
Fatima College's Xavier Mulugata will be off to Louisiana State University (LSU) on an athletic Scholarship from January 2017.

T&T athletes off to US on track scholarships. 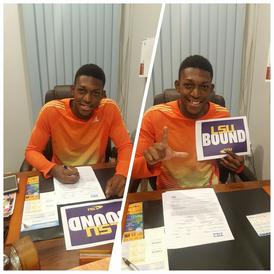 PORT OF SPAIN, Trinidad: Xavier Mulugata (Fatima College) joins a list of T&T athletes who received athletic scholarships to US universities. Mulugata will begin his studies at Louisiana State University (LSU) in January 2017. He won gold at the 2014 Central American and Caribbean (CAC) Junior Track and Field Championships in Mexico in the boys under 18 4x100m and also bronze in the boys under 20 4x100m at the 2015 Carifta Games in St. Kitts Nevis. Several other T&T athletes left for US in August including Dawnell Collymore (West Mucurapo Secondary), Ian Thomas (St. Anthony's College) and Kai Ottley (Bishops Anstey). Collymore, the 2011 Carifta girls under 20 800m bronze medallist, is at ASA College while Thomas is a student at Coahoma Community College. Ottley began studies at St. John's University.

The Trinidad and Tobago Secondary Schools Track and Field Association extends congratulations on their accomplishments and wish them more success. Congratulations also to the respective staff and schools for their integral roles in producing these all-round student athletes.

The vision of the TTSSTFA is to be the leader of track and field development in Trinidad and Tobago through: (a) formulation of strategic relationships globally and in Trinidad and Tobago ; (b) effective promotion of track and field initiatives; (c ) professionally executed track and field events.  In addition to categories for secondary schools students the organisers introduced an more division for tertiary students, teachers and members of the public. A Fun Aerobics and Zumba session is planned for after the race to aid the competitors in cooling down.