Top B U20 Omari Benoit
Omari Benoit (left) was adjudged the Most Outstanding Under 20 Male of the Tobago Falcons Athletic Club for 2016. Benoit is presented with his award by Arlon Morrison (right)

Paralympic gold medallist and record holder Akeem Stewart was named the top Male Athlete of the Tobago Falcons Athletic Club for 2016 at the club's 17th annual awards  at the Conference Room of the Division of Infrastructure and Public Utilities (DIPU), Shaw Park, Tobago on Saturday, December, 17. Stewart was the overwhelming favourite after his gold and silver medal performances at the Rio Paralympics in September. The Scarborough Secondary School past student first won the men's F 42-44 javelin with a distance of 57.32m. His winning mark was a world record in the F 43 class. He was going for a second gold in the discus was had to settle for silver with 61.72. On the local scene Stewart improved his own national Men's Open shot put record mark to 19.96m at Zenith Relays on June 19. He was aiming to qualify for the Rio Summer Olympics but missed the qualifying standard of 20.50m. The 24 year old won the shot put and discus titles at the Falcon Games and shot put crown at the Hampton and Southern Games.

Chelsea James took the top Female Athlete title after her bronze medal effort in the girls under 20 shot put at the Carifta Games in April. The Signal Hill Secondary graduate also competed at the World Under 20 Track and Field Championships in Bydgoszcz, Poland. James was third in the women's shot put finals at the National Senior champs setting a pb of 14.85m which qualified her for the World Under 20 Champs. The triple Carifta champion also won the national senior discus title as well as the National junior girls under 20 shot put and discus crowns. She was also fifth in girls under 20 discus Carifta finals. The Carnbee resident also completed the shot put and discus double at the Falcon Games and took the shot put crown at the Southern Games.  James was also the most outstanding female under 20 performer. Both Stewart and James were previous multiple  winners of the club's athlete of the year accolades.

Carifta competitor Omari Benoit (Under 20 Male) and Clarence Hannibal (Under 18 Male) were the their age class while former Carifta representative Peaches Stewart took the Under 18 Female honours. Hannibal was also the most improved athlete. Christopher Crawford (Male) and Shannon Daniel (Female) took the home the Under 16 trophies. Daniel  was voted the most discipline athlete. Elvis Turner secured the Most Outstanding Distance Runner prize.

THA Chief Secretary Orville London and Collin Nimblett were specially honoured for their support of the Falcon Games.

London accepts award
THA Chief Secretary Orville London (left) was honoured at the Tobago Falcons Athletic Club awards in recognition for his support of the Falcon Games. London is presented by Juliet Roberts-Lucas 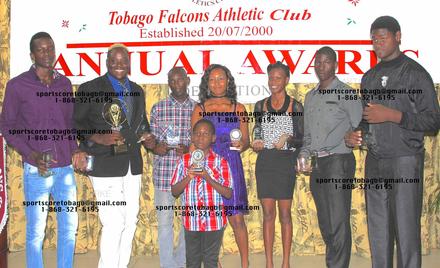 Taken at the Tobago Falcons Athletic Club's annual awards at the Conference Room of the Division of Infrastructure and Public Utilities (DIPU), Shaw Park, Tobago on Saturday, December, 17, 2016.