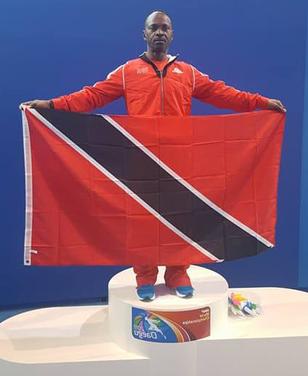 Smith and Martin Prime were T&T's two representatives at the Championships. Prime won bronze the men's 50-54 60m finals in 7.65 and reached the semifinals of the 200m. Now that both are finish competing Smith said they plan to watch some of other races and attend the managers' meetings. " We want to see some of the other events. Today we saw some of the 800m finals. The competitors in the 75 to 80 age groups were really running. So it is good to see persons that age competing. We also plan to attend some of the management meetings because we didn't have a manager to attend for us." The Champs are set to finish on Saturday and Smith is looking forward to seeing some of sites in South Korea. "With the remaining days I plan to so some site-seeing. During our competition we went straight back to our hotels. Now that we are finished wet can check out some of the activities. During the day there are cultural shows in the stadium."

DAEGU, South Korea: (Thur, 24, March),T&T'S Raymond Smith (ZC Athletics) finished in sixth place in the men's 55-59 200m finals at Athletic Promotion Centre (Stadium A-the main stadium)on the fifth day of action at the 2017 World Masters (Over 35) Indoor Track and Field Championships on Thursday morning (T&T Time). Smith crossed the line in 26.88 seconds. American William Yelverton took the gold in 24.82 ahead of Shane Sheridan of Irelend (25.44) and Great Britain's Neil Tunstall (25.64). Paul Guest of Great Britain (25.82) and Japanese Toru Morita (26.41) also beat Smith to the line. The Penal resident was hoping to finish in the top three after he was fifth in the 60m finals on Monday. However he told www.ttsstfa.com he fell short in the 200m finals. "During the race I didn't have the extra (energy) that was needed to medal." He one of three men to ran in both the 60m and 200m finals, an accomplishment he is proud of. "The best part of my performance was reaching both finals." The St. Benedicts College graduate added that his goals were to win a medal and make Trinidad and Tobago proud. "Even though I did not get a medal I felt I did make the country proud." Reflecting on his performance at the championships he said there are areas he has to improve on if he is to do better in the future. "This is my first (World Indoor Champs). I know from my first experience how much work I have to put for the next champs. My preparations were good but I felt I had to do more especially gym, strength and endurance."  Smith said he was tired and weary after his efforts.