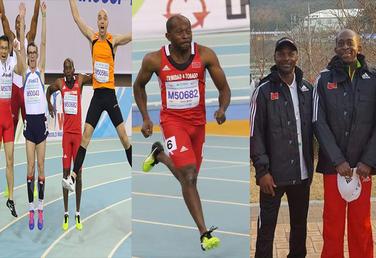 DAEGU, South Korea: (Wed, 22, March), Raymond Smith (ZC Athletics) will vie for gold in the men's 55-59 200m finals on the fifth day of the 2017 World Masters (Over 35) Track and Field Championships currently taking place. Smith advanced to the finals after he was third in the second semifinals in 25.98 seconds held early on Wednesday morning (TT time). He is the fifth fastest of the six finalists. The retired fire-fighter was beaten the line by the Great Britain pair of Neil Turnstall (25.65) and Paul Guest (25.84). American William Yelverton won semifinal one in 24.86, the fastest time of the day.  Smith is now a double finalist as he was in the 60m finals on Monday night, where he was fifth. The men's 55-59 200m finals are set for Thursday morning (1:42am). Smith is listed to run in lane two.

Prime told www.ttsstfa.com, that though he he didn't advance to the medal round he is happy to be injury free. "My muscles are sore but I am thankful I did not get hurt. The 60m took a lot out of me. My God is great.". He regards his bronze medal effort as a miracle. "Coming here you have to run hard to get a medal as you are not handed one. It is a blessing making the finals and running myself into a medal was by the grace of God." The Cocoyea village resident said after winning gold at the 2014 edition, he said goal was to get the finals. "At 54, I was the oldest in the age group and I wanted to come back, get into the finals and then win a medal. So I achieved those two goals. I didn't take each for granted." Now that his campaign on the track has ended the TSTT employee has to cheer on Smith to a medal in the 200m finals. "I plan to go and support Raymond in the finals."

Prime's trip to Deagu was sponsored by TSTT while Smith was supported by Methanex Limited and Ronsafe  Safety and Rescue Limited.