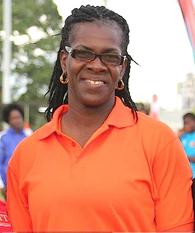 PERTH, Australia: Geraldine George secured silver in the women's 40-44 shot put  finals on the seventh day of action of the 2016 World Masters (Over 35) Outdoor Track and Field Championships on Wednesday November 2. George took the runner-up position at the Ern Clark Athletic Centre with a third round effort of 11.31m to finish behind the winner Vera Yepimashka of Belarus (14.20) and ahead of Finland's Kirsi Koro (10.71). George improved on the bronze she won in the event at last year's World Championships in Lyon, France. The medal is the third for George in Perth following her silver in the javelin on Monday and bronze in the discus on Tuesday. The national javelin record holder achieved a similar triple feat at the 2013 World Outdoor Championships in Porto, Alegre, Brazil when she won the Javelin, was second in the shot put and third in the discus. With the three medals won in Perth the former Carifta champion has now earned 17 medals at the World Masters Indoor and Outdoor Champs. George' shot put silver is the sixth medal for the T&T contingent in Perth.

Marsha Mark-Baird remains on course for third gold medal in Perth as she is into the finals of the women's 40-44 80 hurdles finals.The heats, due to held on Wednesday, were cancelled as there were insufficient entries which mean that Mark-Baird and the other competitors who showed up will compete in the finals set for Thursday. The two-time Olympian won back to back Heptathlon titles in Saturday and the javelin gold in Monday. She is also expected to defend her long lump crown later in the week.

Third medal for George in Perth
Geraldine George won her third medal  at the 2016 World Masters (Over 35) Track and Field Championships in Perth, Australia after her silver medal effort in the women's 40-44 shot put finals on Wednesday.