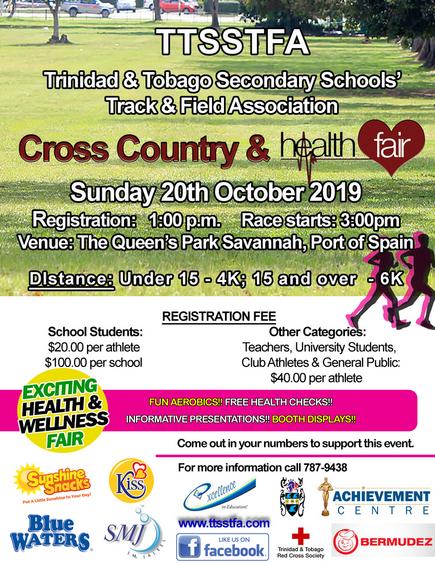 Matthew Pulchan (Point Fortin West Secondary) on his way to victory in the Boys 17 & Over race last year. Pulchan will be aiming to retake the 17 plus race this year and record his fourth win overall.

After the run, students and supporters can participate in Fun Aerobics and get free check-ups and health products from the various display booths that include the Institute of Health and Fitness.  The Cross-Country Run & Health Fair is the first of four major events on the TTSSTFA calendar. The next event is the 5K Classic at Couva East Secondary on December 1. The Relay Festival is listed for the Larry Gomes Stadium, Malabar on February 13, 2020 with the Track and Field Championships slated for the Dwight Yorke Stadium, Tobago on March 4 & 5, 2020.

TTSSTFA provides opportunities for track and field development of secondary schools' students with the aim of unleashing their full potential through: Effective organisation of track and field events, The development of officiating and coaching capacity, and by Developing meaningful relationships with stakeholders.

Registration on the day begins at 1:00pm with the first race set to begin at 3:00pm.

Among the sponsors of this year's races are Blue Waters, VEMCO, SM Jaleel, Kiss and the Institute of Health and Fitness. 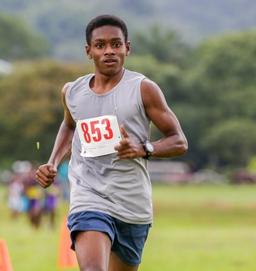 PORT OF SPAIN, Trinidad (Sat Oct 19): The 2019/2020 Secondary Schools Track and Field season commences with the annual Cross Country run and Health Fair on Sunday 20th, October at the Queen's Park Savannah, Port of Spain from 2:00pm. The Cross-Country Run and Health Fair is the first event on the calendar of the Trinidad and Tobago Secondary Schools Track and Field Association (TTSSTFA). Students from secondary schools across the country will compete in age divisions (Under 13, Under 15, Under 17 and 17 & Over). The Under 15 competitors will engage in a 4m run, while the Under 17 and 17 & Over runners will contest for honours in the 6km.

Perennial winner Pulchan is again expected to dominate and 15 year old Bailey who competed in the 17 & over last year, is expected to receive stiff competition from Lewis.