(Wed Dec 7): Matthew Pulchan (Palo Seco/Pt. Fortin West Sec) and Joanna Rogers (Cougars/St. Francois Girls) ran away with the boys and girls under 16 4km (two laps) at the 2016 NAAA Cross Country Championships at the Queen's Park Savannah, Port of Spain on Sunday, December 4.  Pulchan claimed the boys' race in 15 minutes 6 seconds (15:06) beating  Genesis Joseph (Belmont Boys Sec), 15:17 and Ethan Forde (Cougars/Fatima),15:24 into second and third places respectively. Pulchan started slowly as his Palo Seco team-mate Jordan Cooper took the lead ahead of Joseph and Jamal Goita (Toco Titans). Pulchan made his way up the field and was joint second with Goita and Cooper with one lap to go as Joseph went ahead of the race.  The Point Fortin West Secondary second form student pulled away from his rivals in the second and final loop to take the gold. The victory is the third for Pulchan for the season as he captured the Secondary Schools Cross-Country Under 16 title at the same venue on October 16 and the 5K crown on November 20.

Pulchan was elated on his trio of wins. "So far I have been performing real good." The Rousillac village resident is coached by his uncle George Smith was ninth in the men's race and is looking forward to train hard and make his family proud in the 2017 track and field season. He plans to compete int he 800m, 1500m and 5000m.

Joanna Rogers secured the girls' top prize in 17:16 ahead of the Memphis Pioneers duo of Rae-Ann Serville (27:37) and Janeil Bailey (18:21). Serville made a bid for gold taking an early lead. However, the 2016 National Junior girls under 16 triple champion (100mH, 400m, 200m), could not fend off Rogers who finished strong to take the spot. Rogers said he achieved her goal of winning the race. "I believe I performed well. I set a goal to come out here and be the champion and I was able to succeed." Rogers was 18th overall. The 2016 Carifta Girls Under 18 800m finalist was pleased with performances this year. "Was a good year. My goal to run 56 (seconds) in the 400m but I ran 55.67. I made the Carifta Girls Under 18 team as a under 16 athlete. I thought that was a really good achievement. Just being there and having the experience was good." The third form student at St. Francois Girls College is aiming at winning medals in the girls under 18 400m and 800m at next year's Carifta Games in Curacao. Rogers resides in Diego Martin.

Bailey was the top under 14 girls with Zahra Gaskin (Richard Jones Running) in second and Danielle Bailey (Silver Bullets), third. 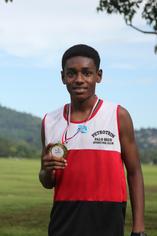 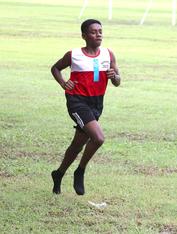 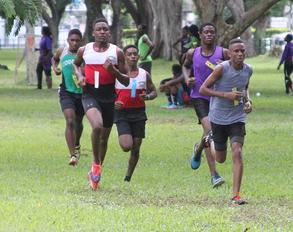 Joseph leading B U16 4Km after One lap
Genesis Joseph of Belmont Boys Sec (right) leading after one lap of the the Boys U16 4Km race. Behind him are from left: Ethan Forde (Cougars), Jordan Cooper (Palo Seco), Matthew Pulchan (Palo Seco) and Jamal Goita (Toco Titans).

Rogers and Pulchan celebrate victory in the U16 4Km.
Joanna Rogers of Cougars (left) and Matthew Pulchan of Palo Seco (right) celebrate their victories at the 2016 NAAA Cross Country Championships. Rogers took the girls race while Pulchan copped the boys version. 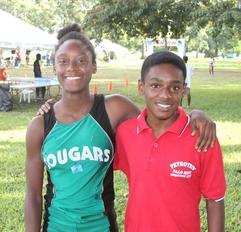 Start of Under 16 4Km
Competitors await the start of the Under 16 4Km at the 2016 NAAA Cross Country Championships at the Queen's Park Savannah, Port of Spain on Sunday, December 4.