Prime and Smith off to World Indoor Masters

Reigning champion Martin Prime  and Raymond Smith are the two athletes who are scheduled to represent Trinidad and Tobago at the 2017 World Indoor Masters Track and Field Championships set for Daegu, South Korea from March 19 to 25. Prime will be going to retain his men's 50-54 60m title which he won at the 2014 edition in Budapest, Hungary in 7.44 seconds. Prime also be seeking to capture won the 200m crown and improve on his  silver medal in the event  in 2014.  The TSTT employee also captured silver in the 100m at the 2013 World Outdoor Masters Championships in Porto Alegre, Brazil.

Smith will be making his debut at the World Indoors and will line up in the men's 55-59 60m and 200m. The retired officer of the Trinidad and Tobago Fire Service was a semifinalist in the men's 100m and 200m at the 2015 World Outdoor Championships in Lyon, France. The duo left for South Korea on Wednesday, 15, March and are set to arrive on Friday, 17 March. Both will begin their quest for medals on Monday, 20, March with the heats and semi-finals of the men's 60m. The finals are set for Tuesday, 21, March. The 200m heats are also scheduled for Tuesday. The semi-finals are carded for Wednesday, 22, March and the finals on 23, March. 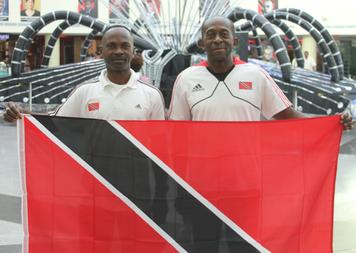