Smith and Prime in South Korea
Martin Prime (right) will get a chance to defend his gold medal when he runs in the finals of the men's 50-54 60m event at the 2017 World Masters (Over 35) Indoor Track and Field Championships in Daegu, South Korea at 8:54pm on Monday night. Raymond Prime will also vie for gold after he qualified for the men's 55-59 60m finals set for 8:51pm on Monday night. (Photo courtesy: PRIME AND SMITH). 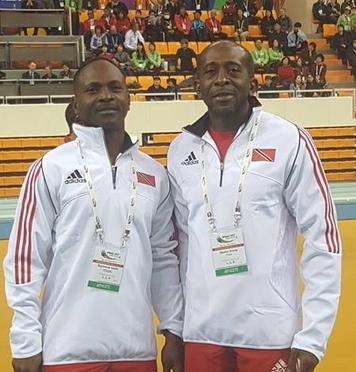 DAEGU, South Korea: (Mon, 20, March), Defending champion Martin Prime (ZC Athletics) remains on course to successfully defend his 60m crown after he advanced to the finals of the men's 50-54 category at this year's World Masters (Over 35) Indoor Track and Field Championships. In the semifinals rounds held at 5:58am (T&T Time) earlier today booked his lane in the finals after he was won the first of three semifinal races in 7.66 seconds. His time was the second fastest behind Francois Bontemps of France who won the semifinal in 7.44. Prime advanced to the semifinals after he won heat seven in the preliminary round in 7.96 seconds, held on 11:25 (T&T Time) on Sunday night.  The finals are carded Monday night at 8:54 (9:54-Tuesday morning-Souther Korea Time).  The TSTT employee will start in lane five and will be looking to win back to back titles after his triumph at the 2014 World Indoor in Budapest, Hungary in a time of 7.44 seconds.

Raymond Smith (ZC Athletics) also booked a lane in the finals of the men's 55-59 60m finals. Smith sped to 7.83 seconds to take the runners-up place in the second of three semifinals which took pace at around 5:52am (T&T time) earlier today. The ex-fireman recorded the fifth fastest time in the semis and will start in lane two in the finals at 8:51(T&T time) on Monday night. In the prelims on Sunday night Smith sped to victory in heat one in 7.88, the second quickest of the round.

​
Prime and Smith will also be action in the 200m heats on early on Tuesday morning (T&T Time). Smith is up first in the men' 55-59 category set for 2:00am. He will start in lane three of heat six while Prime will do battle for men's 50-54 division running in lane six of heat two at 2:40am. Both will be looking to win their heats to be automatically advance to Wednesday's semi-finals.