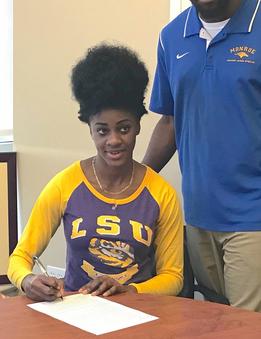 Several more T&T track and field athletes will be taking up athletic scholarships at American universities in January 2017. T&T's 2014 Central American and Caribbean (CAC) Junior girls under 20 4x100m gold medal team-members Kayelle Clarke (La Romaine Secondary), Aaliyah Telesford (Holy Name Convent-Point Fortin), Zakiya Denoon (Speyside High) and Mauricia Prieto (Palo Seco Secondary) are all moving on the universities following their two year stints at the Junior College level.  Clarke will be moving on to the University of Kentucky in January after starring at New Mexico where she won 2015 National Junior College outdoor 100m and the 2016 outdoor 200m titles. The 2014/2015 Carifta Girls under 20 200m champion also broke the New Mexico school outdoor 200m record clocking 23.12. Telesford will be heading for Texas Tech after her stay at South Plains.The 2014 CAC Junior girls under 20 100m winner helped South Plains to victory in the women's 4x400m at the 2015 Junior College Outdoor Champs. Zenoon will be off to Louisana State Unversity (LSU). She won the 2015 Junior College Indoor 60m and 200m titles for Munroe College.   Prieto will wear the colour of the University of Alabama after representing South Plains. Holand Cabara (Holy Cross) has signed for Arizona State University after his time at Sequioa College. Clarke was ranked at number one in the women's 200m on the 2016 National Junior College rankings and was third in the 100m. Denoon was second in the 200m and ninth in the 100m while Prieto was fourth in the 200m and sixth in the 100m.  In August, Asia Ifill left for University of Berkley while Zoe Ifill started at the University of Miami.

The vision of the TTSSTFA is to be the leader of track and field development in Trinidad and Tobago through: (a) the formulation of strategic relationships globally and in Trinidad and Tobago; (b) effective promotion of track and field initiatives; (c) professionally executed track and field events. Among the achievements of the TTSSTFA during the 2014-2016 term are (a) the signing of coverage contract for the 2017 National Track and Field Championships with regional Sports network Digicel Sport Max; (b) the introduction of the Health fair and Aerobics-Cool down to the annual Cross-Country Championships; © the introduction of a press conference ahead of the annual Track and Field Championships; (d) an updated website.