PERTH, Australia: (Monday, October, 31): T&T's Marsha Mark-Baird won her second  gold medal at the 2016 World Masters Track and Field Championships on the fifth day of competition. After a rest day for all competitors on Sunday (October 30), Mark-Baird returned to action on Monday to win the women's 40-44 javelin gold with a distance of 40.13m. Her win is also the second for Trinidad and Tobago at the meet following her triumph in the Heptathlon on Saturday. The victory was also a sweet one for the country as her compatriot Geraldine George took silver in 39.33. Anne Hokja of Belguim captured bronze (39.18). George was the defending champion having taken the 2015 title in Lyon, France. Both Mark-Baird and George are former Carfita champions in the event. Mark-Baird is also the national women's heptathlon record holder (5962 points) and is a two-time Olympian while George holds the national javelin standard (54.10m).  Mark-Baird is a graduate of the Cap-de-Ville Government Primary and the then Point Fortin Senior Secondary School.

Men's 35-39 100m silver medallist Dwayne Caines remains on course for a second medal in Perth when he advanced to the semifinals of the men's 35-39 200m. In the heats the Caines clocked 22.73 to win heat one and was fourth quickest overall. The semifinals and finals are set for Tuesday (November 1). Albert St. Louis, Philbert Ryce, Inga Mc Intyre and Joan Hospedales all advanced from the heats in their respective 200m event.  St. Louis was fourth fastest in the men's 40-44 prelims in 22.89. He topped heat two while Ryce was second fastest in the 45-49 class in 23.37 after winning heat seven. Intyre is into the women's 35-39 semis after finishing third in heat four in 26.71. Her clocking was the 11th fastest. T&T's other entrant Donelle Stafford did not advance as she was disqualified for running out of her lane. In the women's 50-54 prelims Hospedales was 17th best crossing the line in 31.21 as she was third in heat one.

Mark-Baird and George
T&T's gold and silver medallist Marsha Mark-Baird (right) and Geraldine George (left) after finishing 1-2 in the women's 40-44 javelin at the 2016 World Masters Track and Field Championships in Perth, Australia on Monday October 31. 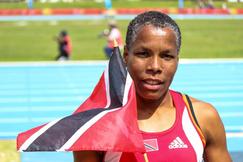 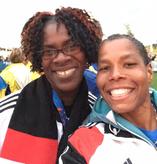