TTSSTFA & MOE
President of the TTSSTFA Dr. Philip Allard (right) shakes hands with Shelly Slater (lleft), Curriculum Officer of Physical Education and Sport with responsibility for Track and Field-Ministry of Education at the launch of the 2018 TTSSTFA Secondary Schools Championships set for the Hasely Crawford, Mucurapo on April 19 & 20. The launch was held on Wednesay, April 11 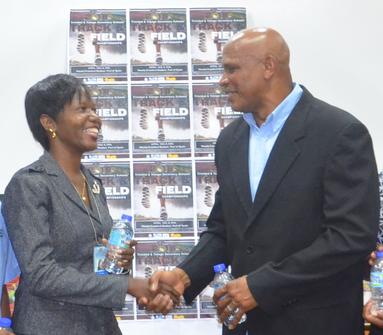 From Anna-Lee Walcott, Alicia Tyson, Fana Ashby, Scot Noreiga in the 1990's to Darryl Brown, Marc Burns, Alicia Cave and Kern Harrypersad in the early 2000's along with Garvin Nero, Keston Bledman Janeil Bellille and Semoy Hackett in the late 2000's all graced the the championships. Nearly all have won numerous medals at the various regional and International championships.

This year's Championships are sponsored by the Ministry of Education, Blue Waters and Sunshine Championships.

Action on the first day of competition begins at 10 o'clock in the morning and at 11 o'clock on day two.