Mark-Baird and Heptathlon field
T&T's Marsha Mark-Baird (right) celebrates with her competitors after retaining the women's 40-44 Heptathlon title on Saturday,  October, 29 at the 2016 World Masters (Over 40) Track and Field Championships at the Ern Clark Athletic Centre in Perth, Australia. Mark-Baird also won the javelin on Monday and finished second in the 80m hurdles on Friday. 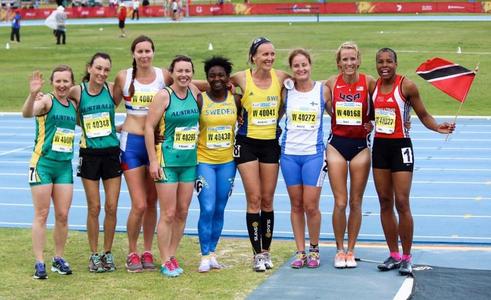 PERTH, Australia: T&T's Marsha Mark-Baird captured silver in the women's 40-44 80m hurdles finals on the 2016 World Masters (Over 35) Track and Field Championship at the Ern Clark Athletic Centre on Friday (November 4).  Mark-Baird crossed the line in a wind-aided time of 11.72 seconds behind the winner Rachel Guest of the USA (11.42) who retained her title. Germany's Christine Muller was third 13.40. The two-time Olympian and national women's Heptathlon record holder was going for her third gold medal after her triumphs in the Heptathlon on Saturday (October 29) and and the javelin on Monday (October 31) but had to settle for the runner-up spot. Guest gained revenge on Mark-Baird after finishing second to the T&T's star in the Heptathlon. Mark-Baird now joins Geraldine George as a triple medallist in Perth. George copped two silvers (women's 40-44 Javelin and Shot put)and one bronze (discus). Mark-Baird will a chance for a fourth medal and a third gold when she defends her long jump title on Saturday November, 5, the penultimate day of action at the championships.

T&T's nine member team has now won seven medals (2 gold, 4 silver, 1 bronze). The championships began on October 26 and will come on an end on November 6. The athletes are competing in Perth through the assistance of the Ministry of Sports and Youth Affairs and the Sports Company of Trinidad and Tobago.