Susannah Joefield
Susannah Joefield (right) was voted the Top Female Masters road runner for 2016 along with Suzan Garcia by the Trinidad and Tobago Association of Masters Athletics (TTAMA). Joefield collects her award from Dave Massiah (left). 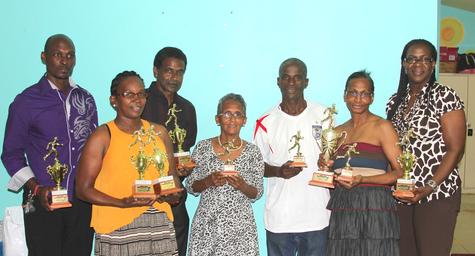 Mark-Baird and St. Louis repeat as TT Masters Athletes of the Year.

Caines was named the top male in the 35-39 division while Donelle Stafford took the female honours. Nicole Noreiga and Philbert Ryce were the picks for the women's and men's 45-49 competitors. Former world champion Gwendolyn Smith (women) and Martin Prime (men) were the winners in the 50-54 category while Cheryl Reyes (women) and Dave Massiah (men) took home the 60-64 trophies. Irma Thomas and Terrance Skinner collected the top Female and Male 65-69 prizes respectively. Irma Riley got the nod for the women's 75-79 prize while Oswald Rogers and Robert Stevenson both collected the men's 75-79 award. Monica Tang Wing was the recipient of the women's 80-84 trophy with Joyce Thomas securing the women's 70-74 accolades. Raymond Smith walked away with the men's 55-59 division. Susannah Joefield and Suzan Garcia were adjudged the best women in Road Running while Curtis Brereton claimed the men's equivalent.

Baird said she is proud of her achievements. "I am honoured to be selected and have always strived for excellence in Track and Field. I am proud of my accomplishments and thank all those who hand a part in it. No athlete does it alone. The saying it takes a village to raise a child, well it takes a squad to generate an athlete.  I have been proud to represent Trinidad and Tobago since my first competition in 1989." She added that she enjoys competing as a Masters athlete. "Competing at a Masters level is so much fun and hard work. To be able to push your body beyond limits is awesome. I look forward to coming back at 50 years and win some more medals and receive some more awards." Baird was not present to receive her prize. Geraldine George collected her awards.

Meanwhile, feature speaker Sports journalist Clayton Clarke, commended the masters athletes on their strides against their younger competitors. "Masters athletes continue to hold their own among their junior rivals, out-performing them in the throwing disciplines and in long distance races, in particular. Geraldine George and Gwendolyn Smith were first and third in the women's javelin at this year's Southern Games. Curtis Cox won the Barbados Marathon title in 2015. Jules La Rode took the men's 5000m crown at the Hampton Games. Cleo Borel continue to compete in the open and professional rank and was finalist in the women's shot put at the Rio Olympic Games. So despite your seniority you are showing that age is just a number according to the Mighty Sparrow." Clarke urged them to compete despite the criticisms they receive about their age. "I want to encourage you press on. Yes you might be old, yes you may be past your peak, yes you may be whatever but I want to say again press on. When I look at you at what ever age you are active and healthy for the most part. He further added that they can continue to help build the country. "You the masters athletes have a part to play in the growth and development of the sport of track and field and of the country. Don't let the critics keep you back. You have a wealth of knowledge to share with the younger ones and as well as a message for those of your age. Our young athletes are always in need of good role models. How else can we turn around the growing lifestyle of crime that seems to be taking over our country? To your peers you have a message to send….Over 50….60….70 ….80 does not mean one have to sit in a rocking chair and complain about old pains all day. Look at you, you are examples of living and active retired and senior citizens."

Female Athlete of the Year-

Male Athlete of the Year- 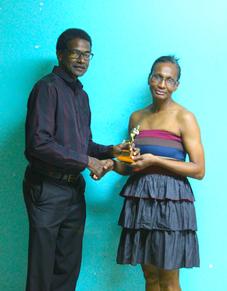 Taken at the Annual Awards for the Trinidad and Tobago Association of Masters Athletics (TTAMA), at St. Mary's Home, Tacarigua on Saturday, December 3. 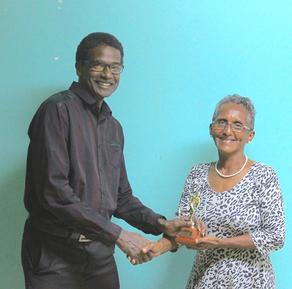 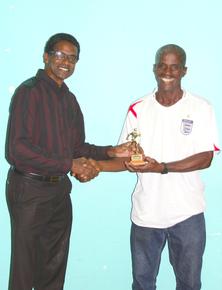 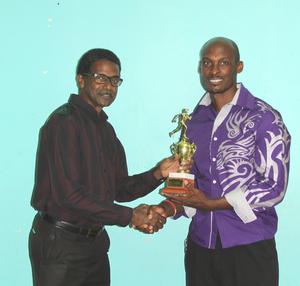 Triple World champion Marsha Mark-Baird and sprinter Albert St. Louis were named at the top Masters athletes of the year for a second straight year by the Trinidad and Tobago Association of Masters Athletics (TTAMA) at the association's annual awards ceremony at the St. Mary's Home, Tacarigua on Saturday, December 3. Baird was the overwhelming favourite for the Female Athlete honours after she sped to gold in the heptathlon, long jump and javelin in the women's 40-44 age group at the World outdoor Masters Championships in Perth, Australia in October. She was also second in the 80m hurdles. St. Louis took the honours in a close race in the men's division. He edged out World Championships men's 35-39 100m silver Dwayne Caines. St. Louis was fourth in the men's 40-44 100m finals and was fifth in the 200m finals in Perth. He also won the masters titles at Hampton Games (100m) and the Falcons Games (200m). Baird and St. Louis were also the top competitors in the 40-44 age class.