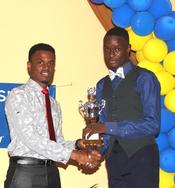 Avindale Smith
Avindale Smith (right) was voted the top under 16 boy. Smith was also one of the club's most discipline athletes. He collects his Top under 16 award from Dr. Keston Adolphe (left). 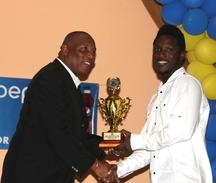 Gonzales-Top U14 and Most Discipline
Asiel Gonzales (right) was named the Top Under 14 Boy. Gonzalez was named one of the club's most disciplined athletes. He receives his Most Discipline prize from club coach Roger Moore (left). 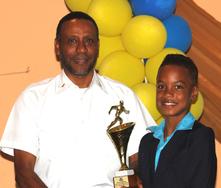 Pickering-Most Discipline
Khadija Pickering (right) was named of the most disciplined athletes.  Pickering collects her prize from Earnest Benskin (left). She was voted the top Under 12 girl athlete. 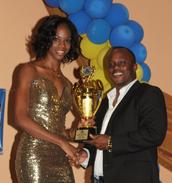 Double World Indoor bronze medallist Deon Lendore and Olympic semifinalist Janeil Bellille were named the top athletes for 2016 of the Abilene Wildcats Athletic Club at its annual awards ceremony at the Arima West Government Primary School, Arima Old Road, Arima on Saturday, December 10. Lendore sped to bronze in the men's 400m at the World Indoor Track and Field Championships in Portland, Oregon, USA in March in a time of 46.17 seconds. He then anchored T&T's men's 4x400m to bronze in national indoor record of 3 minutes 5.51 seconds (3:05.51). Jarrin Solomon, Lalonde Gordon, Ade Alleyne-Forte, (Machel Cedenio and Rondel Sorillo) were the other team members. The 24 year old Queen's Royal College graduate competed at the heats of men's 400m and 4x400m events at the Rio Olympics. In the men's 400m heats he missed out on qualifying for the semifinals while in the 4x400m relay he and his team-mates (Solomon, Gordon and Cedenio) were disqualified for a lane violation. Lendore ended the 2016 season as fourth quickest 400m runner (45.56) on the IAAF World Indoor List and and is 49th best (45.31) on the World Outdoor Performance list.

Bellille was a semifinalist at the Rio Olympics in the women's 400m hurdles where she clocked a season's best of 56.06. She is currently the 53rd quickest hurdler in the world. The 2008 World Junior silver medallist also helped the T&T's women's 4x400m team to a new national record of 3:30.37. Her Abilene club-mate Domonique Williams as well as Sparkle Mc Knight and Kai Selvon were the other members of the team. Both were not present to collect their awards which was presented by president of the National Association of Athletic Administration (NAAA) Ephraim Serrette. Deon's mother, Chispina Edmund, accepted  the honour on his behalf while Kalifa Joseph represented Bellille.

Lendore and Bellille were two of five members of Abilene Wildcats club who represented T&T at the Rio Olympics. Kyle Greaux (men's 200m), Jereem Richards (men's 4x400m), Reyare Thomas (women's 200m, 4x100m) were the others. Club's coach Charles Joseph was also in Rio as one of coaches on the T&T team. Greaux was named the top Male Senior Athlete while April Francis walked away with the Top Female Athlete honours. Greax was a member of T&T's men's 4x100m relay pool  in Rio following his sixth place finish in the men's 100m finals at the National Open Championships in June. Francis won the women's 1500m titles at National Champs and Abilene Track Classic as well at the Southern Games and Falcons Games 800m crowns. Jerod Elcock and Jael Ferguson were named the Top Under 20 performers. Elcock was runner-up in the boys under 20 at the Hampton Games and copped bronze in National Junior Champs 100m finals while Ferguson secured bronze in the 100m at the National Juniors.  Club president Shedley Branche handed over the Senior category trophies.

Jahi Hernandez and Jodiah McSween landed the Under 18 honours presented by Kirk Fleming, principal of the Arima West Government Primary School. Hernandez was second (200m) and third (400m) at the National Junior champs. He was also third (400m) at the Hampton Games and the Abilene Track Classic. He was later honoured for the athlete achieving high academic excellence after he was successful in eight subjects at the Caribbean Secondary Education Council (CSEC) Exams. The Queen's Royal College student obtained grade ones in Mathematics, English Language, Biology, Physical Education; grade twos in Principles of Business; Chemistry, Principles of Business and grade three Additional Mathematics. He currently pursuing A Level studies in Biology, Chemistry and Management of Business.

Avindale Smith and Aaliyah Mitchell ran away with the Under 16 accolades. Smith won the 100m and 100m titles at the National Junior Champs and the Hampton Games and was selected to represent Trinidad and Tobago at the Carifta Games where he was a member of the boys under 18 4x100m which finished fourth. Mitchell copped the under 18 crown at the National Cross Country Champs, finishing ahead of her under 20 competitors. She was also second in the 800m at the National Junior Champs and third (800m) at the Abilene Track Classic. Asiel Gonzales and Alison Phillip were named the Top Under 14 athletes. The Under 14 and 16 trophies were presented by Dr. Keston Adolphe, medical doctor and and club member,  who recently graduated from the University of the West Indies-Mona.

Kadija Pickering and Antonio Smith collected the Top Under 12 trophies.  National Primary Schools boys under 11 200m champion Giovani Bobb-Semple was the best in the boys under 10 division. Bobb-Semple also won the 100m at the Abilene Classic and was runner up in the 60m and 80m at the National Juvenile Champs. Lennox Bailey were the presenter of the Under 10 and 12 awards.

Avindale and Tia Honore were named the Most Improved athletes by the coaches while Dominic Cole, Judah Taylor, Pickering, and Gonzales walked home with the Most Discipline awards. Avindale, Adel Colthrust, Che Lara and Josiah Edwards were honoured for their selection on the Carifta team. Colthrust's bronze medal run in the boys under 18 100m finals earned him the club's Most Outstanding Performance prize.

Jacob St. Clair and Judah Taylor were highlighted after representing T&T at the World Under 20 championships in Bydgoszcz, Poland. Both were on this country's 4x400m team which finished sixth in the finals.

All the athletes received tokens from Pepsi Cola.

Top BU10
Giovanni Bobb-Semple (right), the top under 10 boy. Bobb-Semple is presented with his trophy by Lennox Bailey. 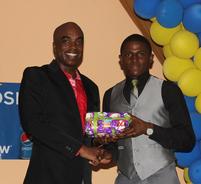 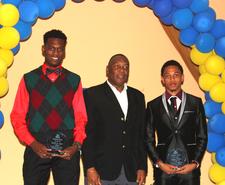 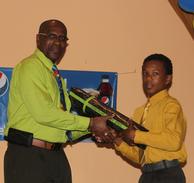 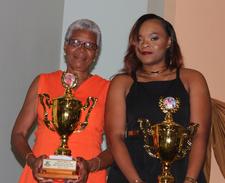 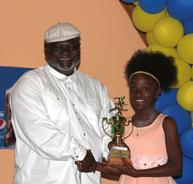