Joseph was elated with her achievement. " It was tough but I was happy for winning. I did my best and I will keep on going.". The third form student said she was motivated to win this  year after coming close in the past two years. "(Finishing second in 2015 and third in 2016 played on my mind). Yes it did." The bespectacled lass is aiming to represent Trinidad and Tobago at next year's Carifta Games and has her sights to competing at the Olympic Games.

PENAL, Trinidad (Mon, Nov 6): Cassandra Joseph  won the girls race  at the 2017 Blue Waters sponsored TTSSTFA Secondary Schools 5K Classic at Shiva Boys Hindu College, Clarke Road, Penal on Sunday, November 5. Joseph completed the course in 17 minutes 57 seconds (17:57) ahead of the Over 17 6K Cross-Country champ Shania Le Maitre (Holy Name Convent-POS), 18:41,  and Kelly-Ann Phillip (Toco Sec), 18:49.  The 14 year old won on her third attempt after finishing second in 2015 and third in 2016. She ensured the girls' crown stayed in Toco for the fifth straight year following the hat trick of wins  Donicia Antoine  in 2014, 2015 and 2016.  Kaylah Jah of Point Fortin West Secondary made her bid for the top spot as she ran away with the male competitors at the start of the race. However, Joseph and her fellow Toco  runner Xea Bruce caught Jah before the roundabout at Katwaroo Trace. Cheziah Phillip (Toco Secondary) was in fourth ahead of Le Maitre with Nikiela Baptiste (Shiva Boys), Jakiba Ramjohn (Malabar Sec), Mikayla Ottey (Toco) and Kelly-Ann rounding off the top eight. Joseph then took control of the race and won by 44 seconds from Le Maitre. Kelly-Ann moved ahead of her rivals to finish in third (18:49) with Bruce ending in fourth (19:44). Aleisha King of Iere High (20:50) took fifth place ahead of Toco's Jada James (22:24), Fayanne Johnson (23.06), Kareice Roberts (23:09), Ottley (23.21) and Cheziah (23.35).

The winner was also the top under 15 finisher ahead of Kelly-Ann and Bruce, while Le Maitre was the best of the top 17 and over competitors leaving Ottley and Cheziah with the minor places. King was the best in the under 13 field.

Le Maitre-2nd
Shania Le Maitre of Holy Name Convent-POS on her way to second place among the girls. 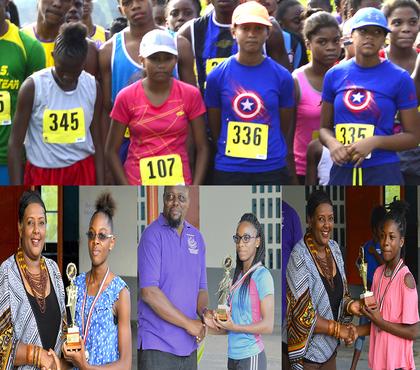