Hagley leads men's 10km
Matthew Hagley (TTDF), right, on his way to victory in the men's 10Km. He is ahead of Colin Pereira (Mayaro Athletics) who was third.

(Thu Dec 8): Matthew Hagley (TT Defence Force) retained the men's title at the 2016 NAAA Cross Country Championships at the Queen's Park Savannah, Port of Spain on Sunday, December 4. In the men's 10Km (held for the first time. In previous editions, the distance was 8Km), Hagley ran a strong second half to take the gold medal in 36 minutes, 32 seconds (36:32) ahead of Shirvan Baboolal (Richard Jones Racing). 36:37 and Collin Pereira (Mayaro), 37:03. The South East Port of Spain Secondary past student opted to start slowly as veteran Errol Williams took the early lead in the five lap event and was ahead at the first lap. Baboolal was in second ahead of another veteran Jules La Rode (Penal) and Elvis Turner (Tobago Falcons). Hagley was in fifth.  The soldier made his bid for gold in the third lap and entered the final stretch in front of Queen's Royal College with a five metre lead over Baboolal, Hagley,  a civil engineering student at the University of Trinidad and Tobago,  took the top spot to claim his third National Cross Country title. La Rode (37:08) was fourth with Williams (37:18), Turner (38:10) following behind. Jameel Cupidmore (UTT) was seventh (38:50) ahead of Christopher Mitchell (TTDF), 38:58, George Smith (TTDF), 30:12 and Derrick Perouza (Richard Jones Racing) 39:43 rounding off the top ten. Former top distance runner Cantius Thomas (One A Week) was 18th. The 50 year old clocked 41:54.

Hagley was elated with his victory. "Today('s performance) was pretty good.The guys were competitive. I am contented with my performance. tI had some rough times this week because I had exams and I had to taper down my training because of the last nights I had to put in (studying)." He explained that his plan take the head in the third lap. "My intention was to sit back and watch the race unfold. My plan was to go ahead at lap three and take it from there." The 30 year old is looking forward to the new year. " This year was up and down due to school. I did not get to do the type of  training I wanted to do but next year God's willing I am coming out with a bang."

Samantha Shukla (Richard Jones Racing) secured the women's 8km crown in 34:56 with April Francis (Abilene Wildcats), 39:33 and Michaelene Williams (UTT), 47:59 winning the minor medals. Shukla took an early lead in the first lap and extended her advantage in the four lap race. Veteran Wendy Shallow (Trinidad and Tobago Road Runners), 38:26 was fourth ahead of Roxanne Mc Kenna (TTRR), 49:54, Shirnell Ettiene (UTT), 51:05, Kechelle Douglas (UTT), 52.04, Sheena Maraj (TTRR) 52:54, Riguell Richards (FAST), 56.54 and Judy Alexander (TTRR), 58:03.  Shukla overcame a bothersome calf muscle to secure the win. The South East Port of Spain Secondary/St. Joseph Convent, Port of Spain graduate was thankful for her triumph. ""I have been working with a not-so-well left calf since last week and it (affected) me in the second lap. I had to talk to myself and tell myself  don't stop as I and to keep going and still run a competitive race." Shukla was happy with her effort. "I was pleased with my performance because it is the first time I have competitively raced an 8Km. I was proud of how I was able to handle the race and I am thankful for the result given that I am not a 100m percent (fit)." The Laventille born and bred runner is looking run quicker times in the new year. "(In 2017) my goals are to improve all my times, and make the Trinidad and Tobago NACAC Cross-Country team and what ever track teams I can make." The 2007 Carifta girls under 17 1500m bronze medallist attended Wichita State University in Kansas, USA on a track and field scholarship where she graduate with a bachelor's degree in Psychology. "Track and field has played a crucial and vital role in my life. It has kept me sane, joyful and put me on the positive track." 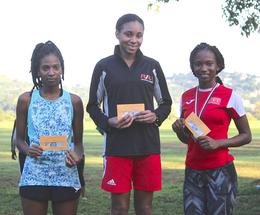 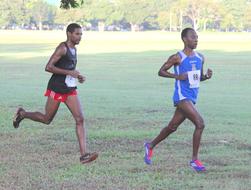 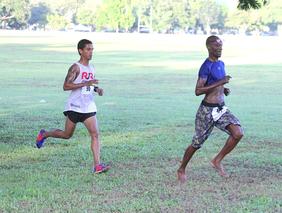