Gordon created history at the 2009 World Senior Championships when only at 17 years he became the youngest ever finalist in the men's 400m hurdles finals. He finished fourth, missing out a medal by 0.03 seconds. His time of 48.26 was new world 17 year old-age best record improving on the 48.66 he had run in the heats several days earlier.  The University of West Indies-St. Augustine graduate competed at his first Carifta Games at the 2007 edition in the Turks and Caicos Islands. In 2008 he claimed bronze in the Carifta boys under 20 400m hurdles finals. That year he reached the semi-finals at the event at the World Juniors before going to win gold at the 2010 edition. At his first Olympics Games 2012 he was sixth in the finals.

He continued his national record breaking form at the 2012 Olympics clocking 47.96 in the semifinals to book a lane in the finals. He improved to the national standard to 47.69 in taking gold at the 2013 World Champs and is now the 22nd fastest men's one lap hurdles of all-time.

The Maraval Roman Catholic Primary School graduate was first introduced to hurdles while at student at Belmont Boys Secondary by his Games teacher Albert King. He  is a member of the Memphis Pioneer Athletic Club and is coached by Dr. Ian Hypolite and managed by T&T's 1964 Olympic bronze medallist Edwin Skinner.

Gordon graduated from the University of the West Indies in 2015 with First Class Honours with a bachelors degree in Sports Management with a double minor in Marketing and Human Resource Management.

The TTSSTFA is committed to working with stakeholders in continuing to produce more outstanding athletes.

Former World men's 400m hurdles Champion Jehue Gordon (Belmont Boys Sec/Queen's Royal College) received a new home in Maracas Joseph from the Government of Trinidad and Tobago. The 2013 World Senior and 2010 World Junior gold medallist collected his keys from Minister of Housing Randall Mitchell  on Tuesday, November 15 at the Housing Development Cooperation (HDC)'s headquarters in South Quay, Port of Spain. The house was a promise made by the Government to him following his gold medal performance at the 2013 World Championships in Moscow, Russia. In response, Gordon said he "was extremely happy to receive another element of my gift for winning the men's 400m hurdles at the IAAF World Championships in 2013, my HDC house. Thank you go the government and citizens of Trinidad and Tobago."

Among his achievements are double gold in the boys under 20 400m hurdles and 4x400m at the 2010 Central American and Caribbean (CAC) Junior Champs. The Maraval resident also won silver (men's 400m hurdles) at the 2014 Commonwealth Games and the 2009 Pan American Junior Championships and bronze at the 2009 and 2011 CAC Senior Champs. 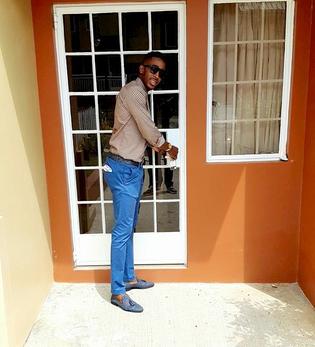