PERTH, AUSTRALIA: Geraldine George finished third in the women's 40-44 discus finals on sixth day of action at at the 2016 World Masters (Over 35)Track and Field Championships at the Ern Clark Athletic Centre in Perth, Australia on Tuesday (November 1). George recorded a best throw of 39.38m to take bronze behind Germany's Bettina Schardt (44.06) and American Elizabeth Teague (39.76). George's bronze is the fifth medal on won by the T&T team at the premier global masters athletic meet. The medal is also the second for George in the event after her silver at the 2013 World Champs in Porto Alegre, Brazil. She also collected her second medal in Perth. She copped silver in the javelin on Saturday. The national women's javelin record holder will be seeking her third medal in Perth when she lines up in the women's 40-44 shot put finals also carded for Wednesday morning.

Dwayne Caines and Albert St. Louis missed out on medals in the 200m finals.  Caines was fourth in the men's 35-39 finals in 22.41 (wind:2.5). The 100m silver medallist was hoping to gain his second medal in Perth was kept off the podium by Great Britain's Richard Bearsell, who won in 21.76, Pablo Martinez of Spain (21.94) and American Sean Burnett 21.96. In the semifinals earlier in the day Caines was sixth fastest in 22.87 after he was third in the first semifinal. St. Louis finished in sixth in the men's 40-44 200m finals crossing the line in 22.71 (1.7).  In the semifinals Louis was fourth quickest (22.90) after he finished second in the second semifinal. St. Louis was aiming to returning to the podium after he was third in last year's finals in Lyon, France.

Double gold medallist Marsha Mark-Baird will begin her quest for a third gold medal when she competes in the heats of the women's 40-44 80m hurdles heats on Wednesday morning. Mark-Baird retained the Heptathlon crown on Thursday before claiming the javelin gold in Monday.

The T&T team competing in Perth received assistance from the Ministry of Sports and Youth Affairs and the Sports Company of Trinidad and Tobago.

George third in Discus
T&T's Geraldine George (left) with her bronze medal after finishing third in the women's 40-44 discus finals at the 2016 World Masters (Over 35) Track and Field Championships in Perth, Australia on Tuesday. Bettina Schardt of Germany (centre) won gold ahead of Elizabeth Teague of the USA (right). (Photo courtesy-Marsha Mark-Baird) 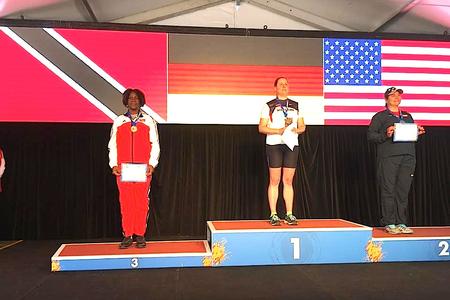