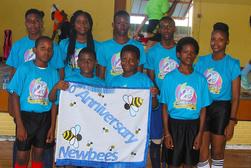 Team Champs were the overall winners of the 20th annual Paradise Hockey Club Skill and Development Tournament held at Scarborough Secondary School Auditorium, Old Farm Road, Shaw Park on Friday, December 16. Champs were fitting crowned champions despite finishing runners-up in the march past and beaten in the second in the finals. The Light green-clad players were overwhelmed in the finals by Purple Rain 5-1 and were edged by one point for the March Past title by New Bees (81 points to 80 points). In the semifinals Purple Rain beat Ghost Busters 1-0 while Champs whipped Tigers 3-0. Purple Rain topped Zone A of the group stage beating Pink Warriors 1-0 and holding Tigers to a 1-1 draw. Tigers finished runners up with a 0-0 against Pink Warriors. Champs took Zone B with a 2-1 win over New Bees and drawing with Ghost Busters 1-1. Ghost Busters were behind in second after drawing 0-0 with New Bees. The victorious Champs team members are Keiran Duncan, Kerrese Hamilton, Malik Job, Byron King, Natanya Powder, Javier Radgman, Mokeisha Toussaint.

​In the March Past competition, New Bees took top honours with 81 points narrowly ahead of Champs (80) and Ghost Busters (69). In the Skills and Drills categories New Bees won the Ball Juggling and Primary Schools Divisions while Pink Warriors finished ahead of Tigers and New Bees in Dribbling. Ghost Busters took home the Grid trophy from Pink Warriors and Champs. New Bees captain Jabari Murray and last year's female MVP were the top pair in Ball Judging. Murray also beat the field in the Surprise Drill.  Radgman was the Junior Male Most Valuable Player (MVP) while J'Lisa Alexander of Tigers walked away with the Junior Female MVP. Alexander was also the top Female MVP in the Primary Schools competition held on Thursday (December 15). King landed the Senior Male MVP and Tiffany James of Ghost Busters the Senior Female equivalent.

Teams were mixtures of the Primary and Secondary students and senior players. The Primary School competition took place on Thursday morning (Dec 15) and was won by Patience Hill Government A team while Scarborough won the girls and boys' divisions in the Secondary Schools contest held on Thursday afternoon.

The Tournament was started 20 years ago to help develop hockey in Tobago. Director Joy-Ann Prescott shared that the competition was the vision of club president Annette Knott who is also the General Secretary of the Trinidad and Tobago Olympic Committee. " It was an initiative of Annette Knott, that we develop hockey in Tobago and the only way we could have done that is by capturing the youths. So we went around to schools all over Tobago and did just that."

Knott, speaking at the closing and prize giving ceremony, told the participants that the tournament has grown over the two decades of its existence. "This is 20 years. How many of you here are over 20 years of age. I want you to understand how long this tournament has been going on. Some of the players standing on the side lines were babies and were just like you and started with this tournament." She also commended Prescott, one of the persons who helped organised the two day competition. Current national player Areisha Sandy played in this year's tournament while former national representatives Alan Henderson, Mauricia Nicholson, Ronnie Chandlier and Handel Thom returned to compete in the special 20th anniversary match late in the evening to end the tournament.

This year's edition was sponsored by the Division of Education, Youth Affairs and Sport of the Tobago House of Assembly, Trinidad and Tobago Olympic Committee and Blink B Mobile. Among the spectators was THA Director of Coaches Peter Granville. 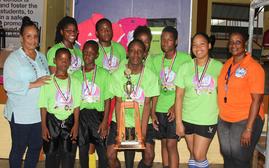 Matches-Champs vs New Bees-2
Players battle for the ball in the match between Champs (green top) and New Bees (blue). Champs won 2-1. 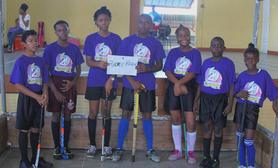