G U18 javelin medallists
Medallists in the girls under 18 javelin after receiving their medals from  THA Secretary of Education, Youth Affairs and Sport Huey Cadette (right) on the first day of the Tobago Secondary Schools Track and Field Championships at the Dwight Yorke Stadium, Bacolet on Wednesday (February 24). Asha James of Signal Hill Secondary (second from right) won gold ahead of school-mate Jelena Murray (left) and Bishops' Silinini Acosta (right). 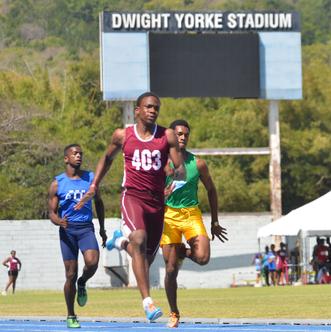 Akanni Hislop
Reigning Carifta champion Akanni Hislop of Bishops High on his way to victory in the boys over 18 100m on the first day of the Tobago Secondary Schools Track and Field Championships at the Dwight Yorke Stadium, Bacolet on Wednesday (February 24). 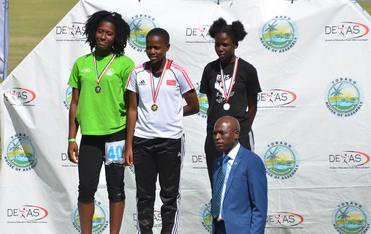 SCARBOROUGH, Tobago: Defending Champions Bishops High remain in contention to retain the overall title at the end of the first day of the

The 100m sprints proved the be the most competitive as Signal Hill Secondary, school of 2009 World Championships 100m bronze medallist Kelly-Ann Baptiste, took the early honours winning the girls (Latoya Garrick) and boys (Daniel Jerry) under 14 races. However, Scarborough Secondary won the battle with three gold medals and Bishops taking two. John won her second title of the day landing the girls under 16 crown. Ayla Stanislaus (G U18) and Oriel Villarael (B U16) were the other 100m gold medallists for the Scarborough Marlins. Ako Hislop secured his second gold of the day winning the boys under 18 race with his brother and reigning Carifta gold medallist Akanni running away with the boys over 18 sprint. Bishops forged ahead in the 1500m Walters brothers John-Mark ( B U16) and Jamael Michael (B U18) and Silini Acosta (G U18) raced to victory for the Bishops Eagles. Speyside’s Miguel Hackett (B O18), Shadyel Trim (G U16) of Pentecostal and Scarborough’s Siami Wiltshire (G O18) took the remaining middle-distance titles on the day.

The action on the first day ended with the much anticipated 4x100m relays and the races were well worth the wait as Bishops confirmed their number status taking three of the six races. In the boys under 18 race Ako ran a strong anchor leg to run past Speyside’s Konnel Job to lead Bishops to the gold and win his third title of the the day. Jamilla Potts (girls over 18 100m winner) won her second gold of the day as like Ato she produced a phenomenal last leg to run down Atasha Hopkins of Scarborough and edged her on the line to take the girls over 18 race. Bishop’s third gold came in the boys under 14 with 100m silver medallist Dejorn Walsh) and bronze medallist Cameroon Groome in their line up. Bishops were expecting more gold in the boys over 18 event with Akanni in the line up but Scarborough got the line first with Lahawn Roberts anchoring. Akanni ran the back stretch. The girls under 18 event proved to be the most exciting of the day as the photo finish was needed to determine the winner. 100m champion Ayla Stanislaus anchored Scarborough to the gold holding Anya Akli as both battled down the homestretch, much to delight of the spectators which included THA’s Secretary of the Division of Education, Youth Affairs and Sport Huey Cadette and 1964 Olympic men’s 4x400m bronze medallist Edwin Roberts. Mason Hall took the girls under 14 sprint relay with 100m runner -up Jelese Alexander taking her team home. Goodwood High were the winners in the boys under 16.

In the field, Asha James (Signal Hill) produced the best performance of the day winning the girls under 18 javelin with a distance of 41.61m,

surpassing the Carifta Games standard of 40.00m. James won silver in the event at the 2015 Carifta Games. Tehelia Kennedy (Scarborough

The official results of several events were not available at the end of the first day as officials were busy computerising the entries. The results and the photo finish officiating are being conducted by the NAAA (National Association of Athletic Administration) with president Ephraim Serrette and Secretary Allan Baboolal both spearheading the efforts.

Action continues on the second and final day on Thursday. The 300m and 400m hurdles will be the first events contested to be followed by the

March past. Among the highlights anticipated is reigning Carifta gold medallist and record holder Tyriq Horsford (Signal Hill) as he goes for gold in the boys under 18 javelin. His school-mate and three time Carifta champion Chelsea James will contest the girls under 20 shot put and discus while Akani Hislop will the heavy favourite to win the boys under 20 200m and compete the sprint double. His brother Ako will be aiming for his third gold in the boys under 18 200m and may go a fourth gold int he 400m hurdles. Safiya John will also be looking for gold number three and four as she lines up in the girls under 16 high jump and long jumps.

The final day will end with the 4x400m relays.