After the run, students and supports can participate in Fun Aerobics and get free check-ups and health products from the various display booths.  The Cross-Country Run & Health Fair is the first of four major events on the TTSSTFA calendar. The next event is the 5K Classic at Shiva Boys College, Penal on November 5. The Relay Festival is listed for the Larry Gomes Stadium, Malabar on February 1, 2018 with the Track and Field Championships slated for the Hasely Crawford Stadium, Mucurapo on February 22 & 23, 2018.

The sponsor for this year's edition is Blue Waters.

The following companies will have display booths: Blue Waters, VEMCO-Gatorade, Bermudez, Institute of Health and Fitness, Herbalife and Kiss Baking.

For more information on the Cross-Country run and Health fair check out the TTSSTFA's website (www.ttsstfa) and Facebook (ttsstfa) pages.

Otis Barker-going for victory in Cross Country
Otis Barker of Toco Secondary will be aiming for his first win after finishing second in the 2015 and 2016 editions of TTSSTFA Secondary's Schools Cross Country & Health Fair .  This year's run is set for the Queen's Park Savannah on Sunday, October 15 from 2:00pm 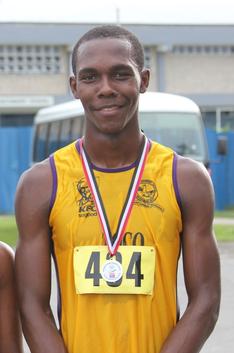 PORT OF SPAIN, Trinidad (Sat Oct 14): Otis Barker will lead the charge for defending team winners Toco Secondary at TTSSTFA's 2017 edition of the Secondary Schools Cross Country and Health Fair at the Queen's Park Savannah, Port of Spain on Sunday, October 15 from 2:00pm.  Barker will be aiming to take the boys 16 & over 6km crown after he was beaten into second place in 2015 and 2016. The reigning Secondary Schools 5K winner had to settle for second behind Joshua James (Valencia Secondary) in 2015 and then denied by Daniel Gibbs (East Mucurapo Secondary) last year. Barker is part of a 60 member strong Toco Secondary School team which includes Jamal Goita (second in Boys under 16 4Km in 2016) and Cassandra Joseph and Xea Bruce, who were first and second in the girls under 14 division of the Under 16 4Km on year ago. Former Girls Over 18 6Km champ Mickayla Ottley and last year's girls open 6 Km third place finisher Okelia Williams are also in the Toco line up.  Boys under 18 third placer in 2016 Valentonio Elder and Carifta medallists Tyrell Edwards and Cheziah Phillip are also listed to compete for the champion school. Reigning boys under 16 4km victor, Matthew Pulchan,  is among six registered to compete of Point Fortin West Secondary. Matelot Community College, Valencia Secondary, Arima Central Secondary, ASJA Boys College-San Fernando, Maple Leaf International, Fatima College and St. Mary's College are among the schools which registered early for the Cross-Country and Health Fair. Two time girls under 16 4km winner Joanna Rogers and 2016 third place finisher Caliyah Wallace, both of Francois Girls College,  are expected to face the starter along with sprinter Rae-Ann Serville of St. Joseph Convent-Port of Spain.  The Cross-Country Run and Health Fair is the first event on the calendar of the Trinidad and Tobago Secondary Schools Track and Field Association (TTSSTFA). Students from public and private secondary schools across the country will match strides in the two age divisions (Under 16 and 16 & Over). The Under 16 competitors will do battle over 4 Km while the the 16 & over runners will vie for honours in a 6km.