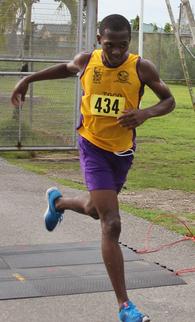 Joseph-3rd G U174K
Cassandra Joseph was second and third in the 2015 and 2016 edition of the TTSSTFA Secondary Schools 5K Classic. This year she is going for gold.

Otis Barker (Toco Sec)
Otis Barker of Toco Secondary on his way to winning the boys title at the 2016 TTSSTFA Secondary Schools 5K Classic in Marabella. Barker will be seeking to retain his crown in this year's race.

PENAL, Trinidad (Fri Nov 3): Otis Barker (Toco Secondary) will be looking to retain the overall boys trophy at the 2017 Blue Waters/TTSSTFA Secondary Schools 5K Classic set for Sunday, November, 5 at the Shiva Boys Hindu College, Clarke Road, Penal from 2:00pm. Barker took last year's crown in sixteen minutes and 34 seconds (16:34) and will be aiming for a sweep following his win in the Over 17 6K race at the Secondary Schools Cross-Country Run at the Queen's Park Savannah on October 15. The sixth form student will be competing in the Over 17 category and will face last year's Under 16 winner Matthew Pulchan (Pt. Fortin West Secondary). Pulchan won the Under 17 4K at the Cross-Country Run in October for the second straight year.  Jaden St. Louis (Downer) and Justin (Parks) Hersely (Sangre Grande Sec) also expected to provide formidable opposition to Barker. At the Cross Country Run Barker  out-sprinted St. Louis down the final stretch to win with Hersley just behind in third.

Cassandra Joseph (Toco Secondary) and Camille Lewis (Sangre Grande) will seek the girls title as 2015/2016 winner Donicia Antoine (Toco Secondary) will not be present. Joseph was second in 2016 and third last year. She will be aiming to finish at the top of the podium on Sunday. Lewis was second one year ago and fifth in 2015. At the Cross-Country Run Joseph was third in the Under 17 4K with Lewis in fifth. Three time Cross-Country Under 17 winner Joanna Rogers (St. Francois Girls) will start as favourite, if she competes. Toco Secondary is the heavy favourite for the overall school honours for yet another year.

The 5K is the second major event on the calendar of the Trinidad and Tobago Secondary Schools Track and Field Association (TTSSTFA). The first event was the Cross-Country Run on Sunday October 15.  The next item is the Relay Festival which is scheduled for the Larry Gomes Stadium, Malabar on February 1, 2018; followed by the Track and Field Championships set for the Hasely Crawford Stadium, Mucurapo on February 22 & 23, 2018.