Moses at Stage Ten
Marlon Moses takes aim at a target in Stage Ten of the 2016 Top Gun Handgun Shooting Championships. Moses was sixth at Stage Ten and third overall. 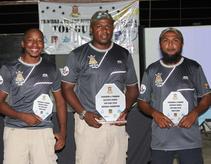 Anderson at Stage 2
Kelston Anderson aims at the target in Stage Two from the lying position of the 2016 Top Gun Handgun Shooting Championships. Anderson was 16th at Stage Two and 11th overall.

Reid at Stage 1
Walt Reid in action in Stage One of the 2016 Top Gun Handgun Shooting Championships. Reid finished 23rd in Stage One and Overall.

Anthony Bailey emerged as champion at the 20th annual Top Gun Handgun Shooting Championships at the Tucker Valley Range, Chaguaramas on Saturday, December, 3. Bailey accumulated 911.5603 points after the ten stages of the contest to beat a field of the 25 of the best shooters in country.  The Trinidad and Tobago Defence Force (TTDF) marksman reclaimed the title he first won in 2014 and improved on his sixth place finish last year. With the support of his father, son and wife  cheering him on Bailey won three stages (Stage 3, 4, and 6) and showed great consistency, finishing in the top four in other seven areas. He was second in Stages 1, 5, 7, 8, 9 and 10 and fourth in Stage 2. Defending champion Darren Jagpersad had to settle for second place this year with 805.2661points. Jagpersad claimed Stage 1 and 9 and was second in Stages 2. He was third in Stage 3 and fourth in Stages 4 and 5. Marlon Moses (720.4053)  took third spot after securing Stage 2 and was second in Stage 3 and 4 and was fourth in Stages 1 and 6. Gerard Persad (720.4053). Avesh Phagoo (666.1206), Christopher John (633.3146), Mohammed Ali (609.3146), Nigel Marchand (606.4511), Jude Gordon (587.9816) and Dave Ramlal (583.5976) completed the top ten finishers. Bailey was rewarded for his consistency as he was named the Most Accurate Shooter on the day ahead of Moses, Jagpersad and Phagoo and also was the Top Military competitor. Persad was the Top Law Enforcement Officer at the meet while Ramlal took home the Top Senior honours. Aneel Ramjit collected the Top First Time Entry trophy. Marchand (Stage 5), Phagoo (Stage 7), Ali (Stage 8) Persad (Stage 10) were other stage winners.

The winner took the lead after the mid-way stage of the competition. After the end of Stages 4, 5, 6, 8 and 9 in the morning session Bailey was ahead of Jagpersad, Persad and Moses, Ali, John, Anderson and Kelston Anderson. Stages 1, 2, 3, 4 and 7 were held during the afternoon period.

Speaking after this triumph, Bailey said he was thankful. "Today there were ten exciting stages and I am really grateful I was able to hold it together and come out with the victory. It was very humid and very taxing on your feet as we were walking about all day so I was a bit fatigued. However, I was able to hold my mental game together and take the victory. " The now-two time winner was pleased with the mental readiness for the competition. "I was happy with my mental performance, most importantly. Amidst all the humidity, fatigue, noise and complex stages I was pleased with how I held it together."  He said that surrendering the title in 2015 spurred him to want to win this year. "Losing last year was the motivating factor for me. Last year I was the defending champion and I came sixth and I was really disappointed after putting a lot of hard work but I was not able to win. So I went back to the drawing board and came out with the victory today."  Bailey also praised the efforts of the second and third place finishers.  "Darren Jagpersad is master like myself and is a really good shooter also Marlon Moses. So  I know those two would have been my main rivals today. The competition was excellent the TRA and other shooting clubs put on really good show. "

Brian Armstrong was the best of the two Tobago shooters in the competition finishing 19th (519.0532) with Walt Reid in 23rd (361.5227). Armstrong was also third in Stage 10 and was fifth in the Most Accurate category.

The top shooters were selected from a total of six competitions held by clubs and associations during a ten month period. Points are awarded to each competitor and ranked to select the top 25 competitors with five reserves.

The Top Gun competition was (TRA)  staged by the Trinidad and Tobago Defence Force and the Trinidad Rifle Association (and was first held in 1996. Initially,  the top five shooters from each shooting club/association were selected. However, the tournament has developed into a highly competitive and dynamic shooting competition which tests the shooter’s knowledge, skills and abilities in the sport of practical shooting.  This year the event was held using the rules of the IPSC (International Practical Shooting Confederation). The TRA has been fully supportive of the Top Gun initiative throughout the years and this year the ten competition stages were developed and built by the TRA with the assistance of the TTDF & TTPS personnel. All props and targets were sponsored by the TRA. The certified range officers, stats officers and arbitration committee were members of the TRA. Kenrick Mohammed served as Range Officer of the competition.

Armstrong at Stage 6
Brian Armstrong shoots from the kneeling position at Stage Six of the 2016 Top Gun Handgun Shooting Championships. Armstrong was fifth in the stage and 19th overall.