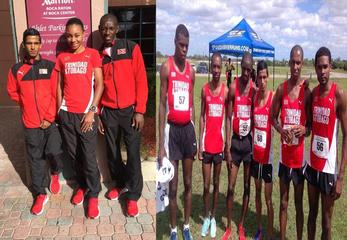 BOCA RATON, Florida, USA: (Sat, 4, March)  Shirvan Baboolal finished at T&T's top competitor at the 13th North American, Central American and Caribbean (NACAC) Cross-Country Championships  at the South County Regional Park, Boca Raton, Florida on Saturday, 4, March.  Competing in only his second NACAC championships Baboolal crossed the line in 18th place in a time of 26 minutes 11.85 seconds (26:11.85) in a field of 27 athletes. The Presentation College San Fernando past student finished ahead of his training partner Colin Pereira  (20th-16:19.73), 2015/2016 national champion Matthew Hagley (22nd-26:51.15), veterans Curtis Cox (25th-28:02.61), Jules Larode (26th-28:24.21) and Elvis Turner (27th-29:30.48). Baboolal told Athletics TnT that he was happy with his run but he could have done better. "I felt good and I had way more to give. I was excited since we landed. I know I could have gone way faster." The 26 year old was pleased with his pace during the race. "I was happy with holding a faster pace than expected and also being patient enough to close in a pass a Jamaican (O'Brien Frith) and some Puerto Ricans." He added that since the National Championships in December he has been preparing for the meet. "I have been on a 5k/10k training programme with (my coach) Richard Jones and my weekly mileage has been higher than usual." The UWI-St. Augustine graduate added that "a lot of daily dedication and not much rest" was put in to get ready. "I had to balance (my training) with work.". The La Romaine resident is praising his coach  and his family for the support. " (I want to credit) Richard Jones for getting me to this stage. My mom and family for being so supportive with the other aspects of my sport. I want to thank Colin Pereira for pushing me to the limit in local races." He also thanked the NAAA for allowing the athletes to complete in Florida.

In reflecting on his effort, Baboolal felt that if he was familiar with course he could have done better. "I didn't know the finish line was so close coming down to the end of the race. After a blind corner toward the end I saw the finish line and thought 'wow already'."  The team landed in Florida on Friday afternoon and according to Baboolal when the athletes arrived at the course at around 5:30pm  it was already dark. "Maybe arriving earlier to Florida would have helped."  He added that he would like to be familiar  with the windy conditions on the course. "The wind was pushing us back so much at one point of the course. We had to pass that point about three times."

Meanwhile Tonya Nero placed 12th in the ladies' 8km event. Nero told Athletics Tnt that  was elated with her clocking. "I am most pleased with my times because I'm seeking improvements along the way." The multiple national holder (5,000m, 10,000m, half marathon, marathon) said she has to work on her speed to go with her endurance.  The 2012 silver medallist in the event added that her preparations were no specific for the championships. "After my break from the (Trinidad and Tobago) marathon (in January) I have ben training at the Wichita State University track and field team. (Preparing for this meet was) just in the mix of things. I am just building myself to run a good marathon."

Coach of the NACAC Cross-Country team Dexter Voisin said he was expecting a better showing from the season runners. "Based on the recent form of some of the more experienced runner, the expectations were a bit higher." He was impressed with Baboolal and Periera. He added that competing at the NACAC level is a mile stone.  "Trinidad and Tobago is not known for cross country running regional and internationally. So when our athletes venture into this competition their efforts must be noted.