Toco Secondary will be seeking to retain the boys and girls schools trophies. In 2015 Toco won the boys' division ahead of Sangre Grande Secondary and Sixth Form Government. In the girls' class Toco took the honours from Sangre Grande and Palo Seco Secondary.

Just under 200 students from public and private secondary schools across the country are expected to participate. The runners will vie for prizes and trophies in under 14, 16, 18 and over 18 age divisions as well as the top Boy and Girls schools. The winners are scheduled to receive their prizes after the completion of the race. There will be also be an Open category for tertiary level students, teachers and members of the public.  A Fun Aerobics and Zumba session is planned for after the race to aid the competitors in cooling down. The deadline for registration was Thursday, November, 17 . No registration will be done on the day of the race.

The 5Km run is the second event on the 2016/2017 calendar of activities for the National Secondary Schools Track and Field Association (TTSSTFA).  The first event was the Cross-country run held at the Queen's Park Savannah on Sunday, October 16. The TTSSFA will like to thanks all the competitors, staff, sponsors, parents and spectators, officials and members who participated in the cross-country and look forward to continued support  in the 5k run. Special mention must be made of John Thatcher, Physical Education Curriculum officer from the main sponsor and supporter, Ministry of Education who was present at the Cross-Country run.

The vision of the TTSSTFA is to be the leader of track and field development in Trinidad and Tobago through: (a) the formulation of strategic relationships globally and in Trinidad and Tobago; (b) effective promotion of track and field initiatives; (c) professionally executed track and field events. Among the achievements of the TTSSTFA during the 2014-2016 term are (a) the signing of coverage contract for the 2017 National Track and Field Championships with regional Sports network Digicel Sport Max; (b) the introduction of the Health fair and Aerobics-Cool down to the annual Cross-Country Championships; (c ) the introduction of a press conference ahead of the annual Track and Field Championships; (d) an updated website. 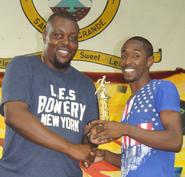 MARABELLA, Trinidad: Donicia Antoine (Toco Secondary) and Kershell Mc Intyre (St. James Secondary) will renew their rivalry as they compete for the girls' crown at the 2016 Ministry of Education/Sports Max Secondary Schools 5Km run set for Marbella South Secondary School on Sunday, November 20 from 2:00pm. Antoine is the defending champion after winning in last year's race  in 21 minutes 8.6 seconds (21:08.60). Intyre copped the Schools Cross-country title on October 16 ahead of Antoine. However, Antoine was declared the winner  as there was a discrepancy in the Mc Intyre's registration. The clash between the two may be the highlight of Sunday's race.  Antoine's school-mate Casandra Joseph cannot be counted out of upsetting the top two after she was second in 2015 and won the under 14 division at the cross-country champs in October.  Daniel Gibbs (East Mucurapo Secondary) will start as favourite for the boys race after taking the cross country's honours last month. Gibbs, who represented Trinidad and Tobago at the 2016 World Junior Championships, will face Otis Barker (Toco Secondary) was runner-up at the cross-country champs and was also second in last year's 5K run. Joshua James (Valencia Secondary) won the 2015 5km gold.  Akeem