Among the plans for 2017 is to invite schools from other Caribbean countries to participate in the National Schools Relay Festival set for February 17. "I have had formative talks with principals from Jamaica, Bahamas, St. Lucia, St. Vincent and the Grenadines, Barbados and Grenada. Two years now I have had those talks. I think we have reach at that point where we may be able to get something going in terms of a Caribbean Inter-School Relay Race. Our National relay festival is set for February 17."  He added that changes to the Festival will have to be made with the inclusion of Caribbean schools. "The schedule might be packed or we may have to go later in the night  if we are getting these (Caribbean) athletes to come down to Trinidad." However, he is eager at the opportunity to form links with other countries in the sport. "That is why I am happy I am here again because those are the kinds of visions that we have in terms of that regional and global linkages so that we can compete with the best that there is."

He is also aiming at assisting students are studying in the United States. "In discussing with some of our older athletes in the United States, they would like to help (the current athletes who) go up the (United) States because many times they are not treated well and are taken advantage of. We had a number of our athletes who have gained scholarships to the US and I think it is my duty to converse with these gentlemen (older athletes)  so that can link with them (the students) in that foreign environment.

Allard shared on some of the challenges the sport of track and field is having encountering at the school level. "Only certain schools are steeped in athletics, many of the schools in the Tobago and North East (Educational districts). We are trying to compete with football and cricket and we are not winning at this point in time." He added that support from school staff is also critical.  "Another challenge is getting fellow teachers and principals to bring out their students for the National Finals, to Zonal Games and staying later (in the day) with them and looking after them." He added that there are concerns about the time teachers spend away from schools. "Teachers are taking time-off after having to take students to track and field after hours and this is problematic. It falls a lot on the (P.E.) Physical Education teachers who are missing school a lot and principals are very concerned about that."

He is also hoping for closer working relationships with the TTSSTFA and the NAAA (National Association of Athletic Administration), the local governing body for athletics. "We hope to improve our collaboration with the NAAA significantly and we are on our way to that.  We would want our results (set at the National Finals) to be sanctioned (by the NAAA) because every wants their times (and distances) to be official. Our hope is that they will be doing all our timing for our sporting events from now on."

Fixed days for the National Finals is also a goal for the TTSSFA. "We are still trying to get a proper (date). Next year's finals are set for April 27 & 28  but the Penn Relays (in the USA) are on that week (and local schools usually participate).

Philip Allard speaks
President of the TTSSTFA Philip Allard speaking at the launch of the 2016 National Secondary Schools Track and Field Championships at the VIP Lounge of the Hasely, Crawford Stadium, POS in April

(December: 01, 2016): Philip Allard was re-elected president of the Trinidad and Tobago Secondary Schools Track and Field Association (TTSSTFA) at the association's annual general meeting (AGM) in October. Allard was given the nod to lead the TTSSTFA for another two year term. Among the accomplishments of the TTSSTFA during the 2014-2016 period were the signing of coverage contract for the 2017 National Track and Field Championships with regional Sports network Digicel Sport Max, the introduction of the Health fair and Aerobics-Cool down to the annual Cross-Country and 5Km Championships, the introduction of a press conference ahead of the annual Track and Field Championships and an updated website.

The Pleasantville Secondary School principal is happy to be a helm at the organisation once again as he wants to continue the work started in last term. He was heartened with the drive to showcase the Association during the last year. "The major goal was to market the TTSSTFA to the general public. That is still in progress and hence a website (www.ttsstfa) which is a significant link to the community out there. We have had a lot of attention on the website." Allard also hopes to continue to liaise with Sports Max and also attract more sponsors. "We have lots of discussion to continue with Sports Max with that rights broadcast deal. We have to engage other sponsors. Blue Waters have been quite excellent with us. Even their competitor SM Jaleel has kind to us." He explains that the TTSSFA needs more funding. " We would able to do much more in terms of moving meets to different areas, going to different schools and carrying our Olympic athletes to speak with students. That would cost us some money to do that." He said the association is already reaping the benefits of the marketing efforts in 2016. "There was an improved attendance to the National Secondary Schools Finals in Port of Spain. It was an older crowd because we normally have it (the National Finals) in the day.  They indicated that they learnt about it (the National Finals) from the numerous radio and television interviews we involved in." 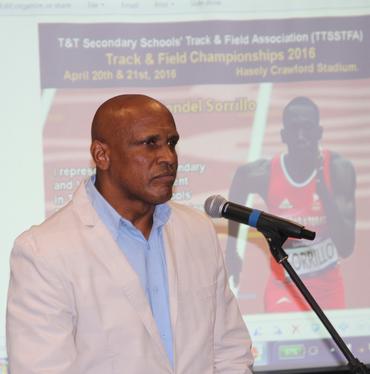