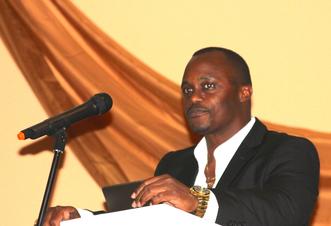 President of the club, Shedley Branche is praising the parents of the athletes for the club's accomplishments. "Many of you have parents have supported all throughout your development and I am sure have and will continue to sacrifice tremendously to see you reach your goal." Speaking at the club's annual award ceremony  at the Arima West Government Primary School, Arima Old Road, Arima on Saturday, December 10, Branche called on the athletes to be disciplined to their training in order. "Discipline is the bridge between talent and ultimate success. Discipline is what is going to bring you out at 5 o'clock in the morning to run the hills and practice your starts and baton exchanges over and over until you get it right. Discipline also is what is going to make you attractive to your future employers after your track days are long behind you." He also commended the coaching staff and administration for their contribution  to the club's accomplishment in the past year.

Feature speaker, sports reporter Kwame Laurence, encouraged the athletes to have a vision for success. "Do you have a dream? If the answer is no that needs to change today. Every day you to out to train you must move one stride closer to realising your dreams. Coaches, parents and administrators you have a responsibility to help the athletes catch a vision.God expects us to have big dreams for ourselves and for others. Hold on to your dreams and achieve greatness." Laurence cited examples of great athletes kept focussed on their goals despite initial disappointments. "Michael Jordan is (considered) the greatest basketball of all time and did not make his high school A team in is sophomore year. He was considered too short but he held on to his dream. He could have given up at that stage. Thankfully he held on to his dream, had a great season with his high school B team and make the A team the following year. He then developed into a sporting legend." Laurence shared that former  top T&T sprinter Ato Boldon overcame a poor showing at his first Olympics games and went to win four Olympic medals. "Ato Boldon would tell you that he did not have a great performance at his first Olympics in Barcelona Spain in 1992. He will also tell you that the newspaper headlines that followed that performance "Boldon flatters to deceive" inspired him. It is now history that Boldon went on to become Trinidad and Tobago's most prolific Olympian with four medals.

NAAA (National Association of Athletic Administration) president Ephraim Serrette also congratulated the club. "I want to congratulate Abilene Wildcats. Fifty three (53) years are lots of years. I want to say to the athletes congratulations on the season and I look forward to seeing you in 2017. Continue to represent your club to best of your ability." He added that track and field has had a big impact in his life. "As a former athlete I want to say to the younger athletes that track and field has done a lot for me. If not for track and field I am not too sure where I would have been today."