TTSSTFA & NAAA Inspect
President of the TTSSTFA Dr. Philip Allard (second from right) chats with Durly Lucas of the NAAA (second from left) as the TTSSFA and the NAAA inspected the Hasely Crawford Stadium, Mucurapo on Wednesday, April 11 ahead of the April 19/20 TTSSTFA Secondary Schools Track and Field Championships to be held at the same venue. Also present were TTSSTFA Vice-president/IAAF Technical Official Janelle Edwards (left) and TTSSTFA Committee member Arnold Rampersad (right). 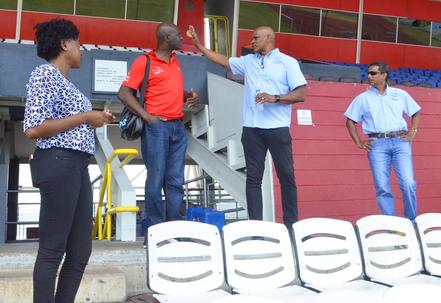 In an effort to improve the standard of the Championships, the TTTSFA has embarked on training teachers and students to officiate and also continued partnership with the NAAA TT (National Association of Trinidad and Tobago). One of T&T's IAAF Technical Officials, John Andalcio (principal of Toco Secondary), hosted a two day IAAF Level Officiating workshop for teachers and students in the North East District at the Sangre Grande Secondary School earlier this month while another IAAF trained official Durly Lucas conducted a one day course for teachers in the Caroni District at Miracle Ministries School in Couva. Dr. Allard says a close alliance with the NAAA is key to the success of the Championships. " I wish to thank the NAAA for ensuring that we have a properly sanctioned games (and) ensuring that the officiating is professional and to to ensure that we follow the correct rules."

From Anna-Lee Walcott, Alicia Tyson, Fana Ashby, Scot Noreiga in the 1990's to Darryl Brown, Marc Burns, Alicia Cave and Kern Harrypersad in the early 2000's along with Garvin Nero, Keston Bledman, Janeil Bellille and Semoy Hackett in the late 2000's all graced the the championships. Nearly all have won numerous medals at the various regional and International championships.

This year's Championships are sponsored by the Ministry of Education, Blue Waters and Sunshine Championships.

Action on the first day of competition begins at 10 o'clock in the morning and at 11 o'clock on day two.

PORT OF SPAIN, Trinidad: (Sun, April 15) With the 2018 edition of the TTSSTFA National Secondary Schools Track and Field Championships set for later this week on Thursday, April, 19 and Friday, April, 20 at the Hasely Crawford Stadium, Mucurapo, Trinidad and Tobago Secondary Schools Track and Field Association (TTSSTFA) is calling for schools to place greater emphasis on the sport of track and field.  President of the TTSSTFA Dr. Philip Allard is hoping schools will include track and field development into the curriculum. "I am asking principals in the developmental planning that track and field development become part of that development plan. It is important that our children grow up in an environment of success because success leads to success." Dr. Allard believes that students need to appreciate the successes of track and field athletes. "When we put that effort into track and field in our schools the children will understand that it is an important aspect in our daily living. We need to ensure that our students know that most of the success that we have in sports in Trinidad and Tobago has been in track and field."