T&T Masters Athletics Association congrats athletes on performance at World Champs
…..laments on funding chaos before leaving for Perth….wants to be financially independent.

The Trinidad and Tobago delegation of nine athletes won eight medals at the 2016 World Masters (Over 35) Track and Field Championships in Perth, Australia from October 26 to November 6. Marsha Mark-Baird led the way with three gold medals in the women's 40-44 heptathlon, long jump and javelin and won silver in the 80m hurdles. Geraldine George copped silver in the women's 40-44 javelin, shot put and bronze in the discus. Dwayne Caines secured siiver in the men's 35-39 100m finals. President of the Trinidad and Tobago Association of Masters Athletes Ahamad As-Siddiq (AAS) speaks to Athletics TnT  (ATnT) on the performance of the T&T team and Masters Athletics locally.

(ATnT):  How does the TT Masters Athletics Association feel about the performance of the T&T athletes in Perth?

(AAS): It is in the context of the many challenges we faced that we can take great comfort from the performances of our team.  The medal haul of eight equates very well with our performance in Lyon 2015 where we had a full team and won 13 medals. This was one of our finest moments. Three athletes received funding from the Ministry of Sports and Youth Affairs (MOSYA) and the other six athletes who made the journey Down Under were self-funded. There were a few hiccups prior to leaving Trinidad & Tobago.  The uncertainty of the amount the Ministry would provide to us was the foremost challenge facing the organization. That is, bearing in mind nineteen qualified athletes qualified for funding. When we received the funding from the Ministry, we had to truncate the team to fit the funds received.   So, we had to deal with the disappointment of persons who would have trained hard.

(ATnT): Any particular performer and/or performance  in Perth by the local contingent stands out?

(AAS): All-rounder Marsh Mark-Baird was our ace performer.  She was simply unstoppable.

(AAS): A core group of our athletes having gone to several regional, international championships (indoor and outdoor) are recognising the stiffness of the competition they face in the respective age groups. They realise that to compete, they must be fit and competing consistently.  In addition, we have in the ranks several athletes who have recently transitioned from senior ranks to masters. So, that if this group continue to train and hold we would be a force to be reckoned at the various meets.

(ATnT):  How do see their performances promoting the cause of Masters Athletics?

(AAS): There are several ways in which we can use the performances of our athletes to promote  the  Masters locally. For example, we can do so through personal contact by encouraging our friends and family. We would be writing to athletic clubs to encourage in their areas athletes over 35 to participate in their programmes. We would also be looking at the Trinidad & Tobago Association of Retired Persons to partner with us in promoting healthy activities.  These are some of the things we intend doing in the future.

(ATnT):  What are some of the challenges the team had to overcome to get to Perth?

(AAS): Our first challenge arose on the morning of our Local Championship at the HCS  the electronic  time system failed to function so we could not have any official times to arrive at the names of the qualifiers who would receive funding.  So  that we had to extend the time to athletes to achieve the standards set for Perth..  Then, there was the negotiations taking place with the Ministry of Sport.  And it was not until a month before the team left that we received the funding they decided to give us.   We also applied to the Sport and Culture Fund for support, but the documentation from our side required the sighting of a visa from each member. We were
unable to provide that in time and therefore, the team remained at three funded athletes.

(ATnT):  How are the athletes selected to represent T&T at the World Masters?

(AAS): The selection of a time for any regional or international is based on qualifying standards for funding set by our Director of Athletics, Albert St. Louis and his team.   The base criteria used was the eighth place of the last championship of WMA or NCCWMA.  A criterion which was added and used for the first time this year, is that athletes should meet the qualifying standards in two events, rather than the one event of past years.

(ATnT):  Some of the athletes were not pleased because they were asked at late notice to find funds.  Your comments on that?

(AAS): As far as I’m aware, I prepared all the members who intended to compete at the World Championships of the situation with the funding.   After my first meeting with the Ministry of Sports and Youth Affairs, I came back to members and informed them that don’t expect to get the funding on time. So, we in the Masters failed the expectations of some members and the results are there for all to see in the media.  There are others deserving to be there and understanding the position and took our decisions with a calm dignity.

(AAS) There are institutions within the association constitutionally framed to promote our activities  and provide other ancillary services, but we must get people to work.   We can do much more if our collective wills are utilized productively.  I would like to see us stand on our two feet and proclaim boldly to the sporting fraternity, we have arrived. That’s why the eight medals in Perth, Australia should be the springboard for higher heights.

(ATnT):  Several masters’ athletes travel to the US regularly to compete at meets there. How important are those meets?

(AAS): These meets are very important.  They  help to develop our capacity and to give us a gauge as to where we are in comparison to our fellow foreign athletes who we meet often in regional and international competitions.  It is only through constant competition that we can improve our standards.  The opportunities provided in the  USA  enable our athletes to face quality competition.  When we speak with our North American and European counterparts, they tell us that they often crisscross states every weekend to compete at events for masters, solely.  We  in T&T can’t do that locally.  And in this connection, I must commend those athletes who have funded their participation at these meets.  Locally, we mainly depend on the NAAA’s Developmental meets to get competition for others not so fortunate.   In a lot of instances a member may qualify but is at a disadvantage in the Worlds especially, because he she may have had only the local meet under the belt for the year. Critically though we have five stadia in our twin-island state, if we were to become proactive, we can host five meets in a year.

(ATnT):  What are the goals of the TT Masters Association for 2016?

(AAS): We had at least three matters under consideration for 2016:
(a)  Registration with the Ministry of Sports and Youth Affiars as an non-governmental body (NGB).  We have been stalled in the process.
(b) Completion of a Business Plan (Medium and Long term).  Everyone has an excuse when asked to assist.
(c)  Improvement in Accounting System.   Partially achieved.

(ATnT): . What are some of the activities held by the TT Masters Athletics Association?

(AAS): Basically, we host one local championship per year, our annual awards function and that’s it.  But I think we should look at including in our activities a few recreational sports i.e. table tennis and draughts etc.

(ATntT): What are some of the challenges faced by the association and how did you overcome?

(AAS):  Our challenges are multi-dimensional.   Expertise in marketing. Under development of a cohesive and functional organization.  Unclear definition of the role of the members within the organization. To overcome these challenges will take time.  You know, non-performance and making excuses become institutionalized and to move an organisation forward in that mode often renders someone with the best of intentions useless.  Just to get an increase in subscription fees brings stiff resistance.

(ATnT):  How does the association plan to honour the achievements of the athletes who performed well in Perth?

(AAS): We have discussed a system which rewards the athlete medaling in worlds and regional championships and, for record breakers.  I would like to revisit that and make it effective from Perth.

(ATnT): What are the activities planned for the rest of the year?

(AAS): We have our Awards Ceremony in early December and our AGM on the third Saturday in December 2016.

(ATnT): Looking ahead to 2017, what are some of the major activities and meets on the calendar?

(AAS): Come 2017, we have World Indoors Champs in March 2017, Daegu, South Korea, NCCWMA Regional Champs in Juarez, Mexico in July/August and our Local Championships. Other activities could include a few funds raising programmes.

(AAS): My wish would be to achieve financial security for the organization, so that we would not have to be dependent on the whim and fancies of external forces.

Mark-Baird welcomed home
Marsha Mark-Baird (right), T&T's triple gold medallist at the 2016 World Masters (Over 35) Track and Field Championships in Perth, Australia (October 26-Nov 6) returned to her home in Provo, Utah  with her husband Gregory (left). She was greeted by congratulatory messages on her garage door by her neighbours. 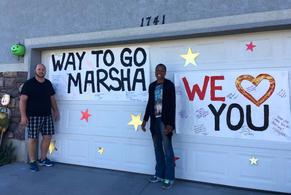 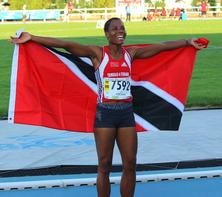