B U21 4x400m
Jacob St. Clair of QRC (left), Andrii Campbell of Fatima College (centre) and  Toco Secondary'sOtis Barker in action in the boys under 21 4x400m.

PLEASANTVILLE, Trinidad): (Friday February, 17)
The 12th Annual Secondary Schools Relay Festival began with a bang on Thursday, February 16, 2017 at the Larry Gomes Stadium, Malabar. His Excellency Anthony Carmona declared the meet open and expressed his pleasure to be present at a place where it all begins for our young athletes. He was accompanied on the podium by Mr. John Thatcher, Curriculum Coordinator, Physical Education, who brought greetings on behalf of the Ministry of Education and Mr. Philip Allard, President, Trinidad and Tobago Secondary Schools’ Track and Field Association (TTSSTFA).

His Excellency congratulated the Association on its staging of the Festival and lamented the situation that all but one Tobago schools could not participate because of shortcomings on the air bridge. He stated that for the next event he hoped to see principals and schools supervisors supporting and suggested that scholarships be given for sporting accomplishments as is done for CAPE.

The Relay Festival is the third major activity on the TTSSTFA’s 2016/17 calendar of events. Thirty-one schools from across the nation, including five (5) from Tobago registered for a variety of relay races. The events include the traditional and popular 4x100m and 4x400m disciplines to the lesser known and equally competitive 4x200m and 4x800m. ​​ 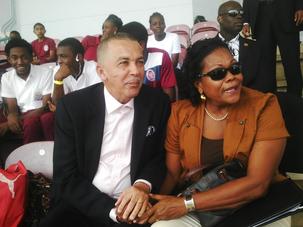 This year’s Relay Festival was historic because for the first time ever, the event was streamed live on SportMax across the region.

This year Toco was dethroned in some of the Girls’ competition, winning only the Under 16 and Under 21 age groups with 34 and 24 points respectively.  Arima Central took the honors in the Girls’ Under 14 with 16 points, while Bishops Anstey High ran away with the Girls’ under 18 with 36 points. In the Boys’ grouping, Queen’s Royal College took the Under 21 category with 30 points, Holy Cross College the Under 14 category with 20 points, Fatima College, the Under 16 with 28 points and the mighty team of Sangre Grande Secondary capturing the top berth in the Under 18 category with 32 points.

In attendance were Olympic 100m gold medalist 1976 Hasely Craword, Olympic 4x400m bronze medalist 1964, Kent Bernard and T&T’s first female Olympian 1972, Laura Pierre. Soca Artistes Kyrie Flemming, Kerry John and Swappi performed for the athletes and spectators. Blue Waters was the official water for Relay Festival 2017 which was hosted by the Trinidad and Tobago Secondary Schools Track and Field Association (TTSSTFA) and SportsMax held the official media rights for the competition which was broadcast live across the Caribbean.

​Many of the participating schools use the Relay Festival to prepare for the Penn Relays in Pennyslvania, USA in April.

G U21 4x400m
Delicia Thom of champion school Toco Secondary running the first leg of the girls under 21 4x400m.