Gibbs and Valentine in B U18 & 20 8Km
Daniel Gibbs (Mustangs). left, and Kyron Valentine (Silver Bullets), right in action

Taken  at the 2016 NAAA Cross Country Championships at the Queen's Park Savannah, Port of Spain on Sunday, December 4.

Winner of G U20 6Km-Donicia Antoine

Mitchell was happy with her victory and dedicated to her deceased aunt. "I am proud of myself. I ran this for my aunt away who passed away this week. This is for her. I ran the best for her. The course was a good one, a little hard on the hills but at the end I was successful." She added that that she prepared for event. "I trained a lot and I deserve my result. ! was injured (earlier in the season) but I overcame the injury. "

Joshua, who won last year's Secondary Schools Cross-country and 5K crown, described the race was a competitive and interesting one. "(I made my move in) the last lap. (I) just stayed with the leaders and when I got the chance I made my move." The Wallerfield resident added that the win was high point for the year for him. "Each year is getting better and better for me. (In 2016 this) cross-country (victory was the highlight for me). He will be competing in the men's division in 2017 and is hoping to represent Trinidad and Tobago.  "Next year I (want) to make the national team." 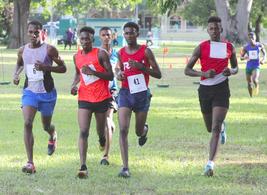