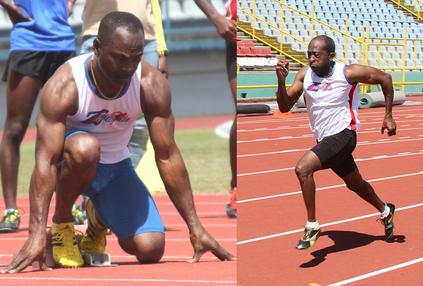 DAEGU, South Korea: (Tue, 21, March), Martin Prime (ZC Athletics) copped bronze in the men's 50-54 60m finals on the third day of the 2017 World Masters (Over 35) Indoor Track and Field Championships in Deague, South Korea on Monday. At Athletic Promotion Centre (Stadium A-the main stadium), at around 8:54 pm on Monday night,  Prime crossed the line in 7.65 to claim Trinidad and Tobago's first medal of the Championships. The St. Benedicts College graduate was beaten to the tape by Francois Bontemps of France, who won in 7.50 second and Kuzuhiro Urayama of Japan (7.60). Prime was hoping to retain his title after he won the event at the 2014 edition in Budapest, Hungary 7.44 seconds. The Cocoyea, San Fernando resident has now won a full set of medal as he captured silver in the men's 50-54 200m in Budapest.

Minutes earlier, Raymond Smith finished fifth in the men's 55-59 60m finals in 7.96. American Robert Foster took the title in 7.81 edging out Yasuhisa Yuri of Japan (7.81) in a photo fish. Australia's Rudy Kocia (7.84) and Shane Sheridan of Ireland (7.89) all finished ahead of Smith. The retired fire-fighter was competing in his major Masters global finals.​

​Speaking after his bronze medal run, Prime told TTSSTFA.com website, he was happy to have won a medal in the event. "I am content and thankful to God that I am coming back home with a medal." The TSTT employee said he was confident after his win in the semi-finals. "After the victory in the semifinals I felt I had a chance to medal. After the finish I was not too sure what I placed. It is only when I looked at the score board I realise I was third." Prime was  pleased with running finals for a second time.  "I am glad I made the finals once again. I didn't run as in 2014. I did my best and I am satisfied but that was not enough." Reflecting on his medal-winning achievement, Prime took time to express gratitude his employers and sponsors, the Telecommunications Services of Trinidad and Tobago (TSTT), as well as his supporters. "I want to thank my co-workers, my wife and children, my club ZC Athletic club, my church Revival Time Assembly in San Fernando, NAAA (National Association of Athletic Administration), TTAMA (Trinidad and Tobago Association of Masters Athletes and the local track and fraternity."

Prime did not have much time to celebrate as less than six hours later he faced the starter in the heats of the men's 50-54 200m. The 54 year old was second in heat five of the preliminaries in 25.25 seconds to book a lane in semi-finals Wednesday morning at 1:35am (T&T time). Smith ensured he had a spot in the men's 55-59 200m semis topping heat one in 26.04. His semi-finals race also set for Wednesday morning (1:25am).

Meanwhile, Smith said had he run the 60m finals as he did in the heats and semifinals, he felt he could have won a medal. " I changed my game plan in the finals. I didn't get out and stayed low as I expected." He was grateful of the opportunity of competing in his first World Masters Indoor Champs. " The experience was good given it is the first time." He also paid tribute to his sponsors Methanex Limited and Ronsafe  Safety and Rescue Limited.

Prime and Smith left for South Korea on Wednesday, 15, March and arrived on Friday, 17, March, three days ahead of their first day of competition. However, both told TTSSTFA.com that they are unable to sleep well as they are still adjusting to change in time zones. South Korea is 13 hours ahead of Trinidad and Tobago.

Prime and Smith
Martin Prime (right) won bronze in the men's 50-54 60m finals and Raymond Smith (left) was fifth in the men's 55-54 60m finals. In picture, Prime in action at the Second NAAA Development Meet at the Hasely Crawford Stadium, Mucurapo on 14, January and Smith competing at the Sixth NAAA Meet at the Larry Gomes Stadium, Malabar on 5, February. (Photo courtesy: SPORTSCORE TOBAGO).