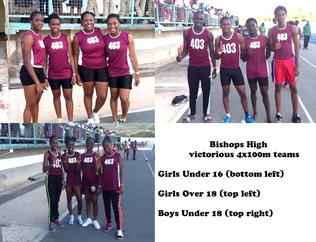 Bishops athletes were dominated the under 18 category capturing nine of the 14 gold medals in the girls division and half of the winners in the boys class. Leading the way for Bishops were Ako Hislop, younger brother of Akanni, and Anya Akili who both captured four individual titles. Ako secured the boys under 18 100m (11.12/-0.4), 200m (22.41/-0.1), 110m hurdles 15.25/-1.5) and 400m hurdles (1:00.50) and then ran a blazing anchor leg in the 4x100m to take Bishops to gold after his team trailed Speyside High at the final hand over. Akili took home the girls under 18 100m hurdles (16.01/-1.9), 400m hurdles (1:06.26), high jump (1.55) and long jump (5.12). She also grabbed gold with the 4x400m team and anchored the 4x100m to silver, narrowly losing to Scarborough. Peaches Stewart also won the girls  under 18 shot put and discus throws while Silini Acosta took the girls under 18 1500m and the girls open 3000m. Bishops also topped the boys under 16 class winning seven of the 13 events. John-Mark Walters (800m/1500m) and Shaquille Benjamin (high jump/long jump) led the way with double victories. In the girls over 18 division Bishops finished with five (of the 11) gold medals with Jamila Potts (100m/200m) contributing with two and anchored the 4x100m to a sensational victory over Scarborough Secondary, making up considerable ground and snatching the gold on the line. The battle for top honours in the boys over 18 division was close as Scarborough Secondary, Bishops and Signal Hill Secondary all won three gold medals each. However, Scarborough finished ahead with five silver, one bronze, compared to the one silver, five bronze by Bishops and one silver, one bronze by Signal Hill. Kerlon Ashby (110m hurdles), Lashawn Roberts (400m hurdles) and the boys over 18 4x100m took gold for Scarborough while Akanni Hislop (100m, 200m) and Edson Moses (discus) were the winners for Bishops. Darren Alfred (400m, 800m) and 4x400m were victorious for Signal Hill.

UWI-Sixth Form fielded a three member team and won four gold medals and one silver with Chevelle McPherson was responsible for four of the five medals. The 2015 Carifta representative won the girls over 18 long jump (4.93), shot put (9.77) and discus (33.24). She missed out a fourth in the 200m when she finished second. Carifta bronze medallist Omari Benoit collected the fourth gold in the boys open high jump.

Goodwood High’s two titles came through Darrion Williams (B U18-800m) and the boys under 16 4x100m. Roxborough Secondary, the school of national 800m record holder Sherridan Kirk and national footballer Cyd Gray (who also competed at the Carifta Games) won their lone gold as Angel Nixon took the girls under 16 discus.